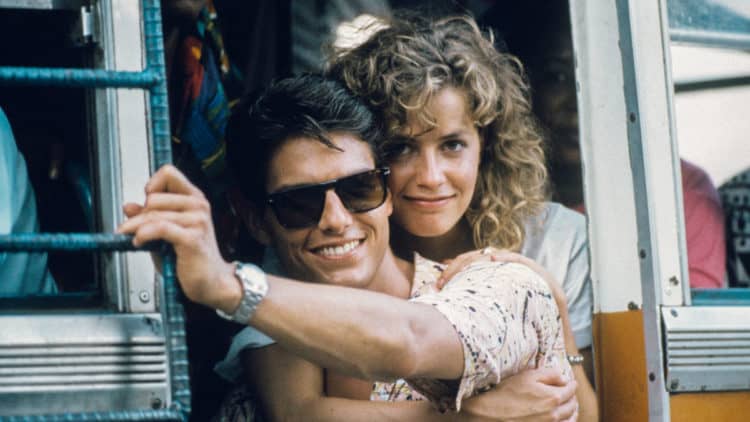 Leaving all puns behind and to the side where they need to be, the moment when Tom Cruise saved Elisabeth Shue’s life is likely a memory that both actors still recall vividly since it sounds as though it was a brush with death that could have gone rather poorly. The incident happened during the filming of Cocktail when Shue and Cruise were being filmed riding horses along the beach while the director was filming from a trailing helicopter. There was no danger from the horses, but upon landing the helicopter the rear rotor kept turning so that the craft could lift off easier since they were touching down now and again to check the shot. The problem came when Elisabeth, perhaps in a hurry to get back to the horse or to somewhere else, made a sudden turn to the rear of the helicopter, where the rotor was still spinning. Cruise, who was an experienced pilot at that point, saw the danger and went running after Shue, who didn’t see the danger apparently but was incensed when Cruise tackled her around the legs, the only part of her that he could reach at that time. When he rolled over and pointed at the rotor, however, it’s said that Shue went deathly pale as she finally realized just what could have happened and didn’t. It’s fair to say that both their heart rates were more than a little elevated at that point since the sudden knowledge that she’d been saved from a rather messy and no doubt painful death was probably a little humbling. Some folks might want to say that Shue was being irresponsible and not at all bright, but playing devil’s advocate it might have been that she had no idea that the rear rotor was still moving, and could have been thinking about anything else.

What any pilot, or anyone with a lick of common sense hopefully, will tell you is that when hanging around a heavy piece of machinery, especially one that has moving parts, it’s wise to understand and comprehend your surroundings. Again, it’s very likely that Shue wasn’t really thinking about the helicopter at that point, in fact, it’s kind of obvious that she wasn’t, but thankfully Cruise was there to do something and was quick enough to react. There are plenty of accidents that have happened on the set, and hanging around a helicopter with the rotors still spinning feels like a bad idea, to begin with, but one still has to be able to look around and understand the risks of the area that they’re standing in. There might be those who would say that this could breed paranoia, but the truth is that by knowing your surroundings and what can possibly happen it’s easier to understand the possible dangers that are there to be experienced. It doesn’t mean that a person has to wrap themselves in padding at all times, or has to know every possible way out of trouble wherever they go, but being attentive is a good trait to cultivate since more often than not such an attitude can lead to a much safer environment. There’s no doubt that Shue and Cruise still remember this moment quite well since it’s not something you tend to forget that easily. There are plenty of moments on movie sets when people might have died had they moved a little further in one direction or the next, and it’s easy to wonder how many stars might not be here any longer if they hadn’t had someone to help them out in a critical moment or if they hadn’t been aware of their surroundings.

That heightened sense of awareness isn’t always evident in a lot of people since folks tend to take the world around them for granted once they’ve been in an area long enough. Some people can’t get comfortable since they have an acute understanding of the dangers that are prevalent in their environment, while others simply don’t care since if something’s going to happen then it’s going to happen. But a lot of people tend to pay closer attention and gain a greater affection for life when they suddenly realize that it’s about to end. That’s why it’s amusing, kind of, that Shue would look back and yell at Cruise for tackling her. The appreciation came shortly after she realized that she’d nearly run headlong into a gruesome end though, since like it or not, quite a few people don’t really appreciate this life or the suddenness with which it can end until that moment is almost upon them. Some don’t ever get the chance to realize how close they are until the lights go out, but those that do tend to gain a much greater appreciation for the life they have once they realize how close the precipice really is.