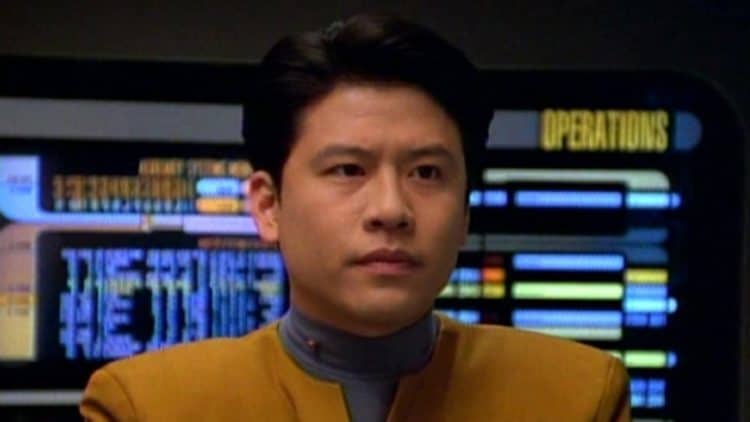 How big of a mess would it have been had Garrett Wang, a Star Trek actor, actually hit Harrison Ford? The constant bickering back and forth between Star Trek and Star Wars fans is already a point of tension in the scifi world at this point, but if the Star Wars fans had been given something like this to stew on one can only imagine that they would be using it repeatedly, as in “Yeah? Well no Star Wars actor has ever killed a Star Trek actor!”. It’s not exactly a trump card to be certain, but it’s something that’s morbidly amusing since apparently Wang was so excited about getting his role on Voyager that was zipping around the lot trying to get to his fitting after getting his part. The idea of hitting Harrison Ford was obviously a memory that he couldn’t help sharing on his podcast, The Delta Flyers, and it’s fair to say that had he actually struck the star it would be an easy target for Star Wars fans to find and continue to push. Realistically there are a lot of people that love both Star Trek and Star Wars, but had this happened it feels accurate to say that Star Trek fans would have done their best to run damage control while Star Wars fans would have been out for blood. That’s a worse case scenario however, and not that realistic. It’s amusing to think of though since the whole thing could have been blown up in a big way, even back in the days before social media.

Even more amusing is Wang’s ability to sound a bit prissy when he found that the boots he was to wear for the show turned out to belong to Brent Spiner and refused them. When you’ve been selected for a TV show that was your big hope and dream it’s usually better to be grateful for anything you get, but apparently Wang wanted new boots made, so he got them. Unfortunately when he got them the boots were too tight and as a result he had to go out and buy his own boots after making a tremendous stink about it. The moral of that particular story obviously is that being a diva on the set over a pair of boots is less useful than one might think. Thankfully Wang saw the wisdom inherent in this as he grew a little bit as a person after that, or at least didn’t raise a stink about his footwear from that point on. It’s too possible for a lot of actors to forget that they’re not only replaceable if they don’t have the right attitude, but it’s also possible for some of them to act like major divas when they first come on set. With all respect to Voyager and Wang, he’s an actor that a lot of Trekkies might know about, but apart from that, he’s not exactly a huge deal throughout show business, at least not the kind that would be said to be the type of guy that is worth the kind of newsfeed that other, more well-known actors have earned. Had he struck Harrison Ford though he would have been worth more than a blurb since the story would have likely been blown out proportion and given a good deal of press in its own time. As of now though it’s an amusing story that he gets to tell and remember for some time to come.

To be fair to Wang, he’s still acting and he still has a career, but he still hasn’t reached the level of notoriety that he might have had he struck Ford, or had he become a fan favorite on Voyager. He’s been involved in a few different Star Trek projects throughout the years, which makes sense considering his involvement with the franchise, but as far as stardom goes he’s been one of those stuck firmly in the middle ranks when it comes to acting and the level of fame that he’s earned. That’s not a bad place to be really since it keeps a person busy and paid but without the constant pressure of having to impress people on a regular basis. It might mean he’s not quite the attention-getter that some people love to be, but it does mean that he’s managed to stick around when several other people have bowed out over the years. At this point it’s kind of interesting to wonder if Harrison Ford even remembers the guy that almost him or if it’s something that he would need to be reminded of. Something kind of indicates that it would be the latter since really if a person remembered everyone they’d crossed paths with briefly it would be amazing. All in all though, it’s a good thing Wang didn’t hit him.