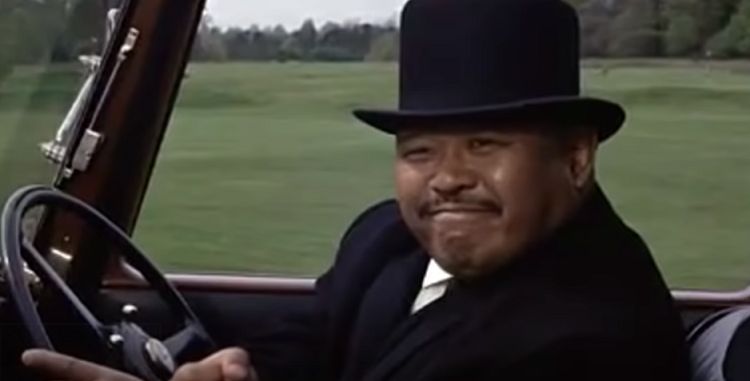 For any and all Bond fans, there have been several strange and unusual weapons that have come along within the franchise. Some of them have been practical and aren’t too hard to imagine, while others, like Oddjob’s hat from Goldfinger, are a little more difficult to get behind simply because the impractical nature of it makes such a weapon impressive to think about even if it’s not something that would be able to do the damage that it was seen to do in the movie. It definitely looks impressive, there’s no doubt about that, but there are at least a few reasons why this is such an impractical weapon, particularly because, first and foremost since it’s a one-shot weapon that relies heavily on the skill of the wielder. There’s no denying that this weapon can do some damage, it’s a big hunk of metal fashioned into a disk and made into a hat, so the weight alone will work in its favor when it’s tossed about, but when it comes to slicing the head off of a statue, it might chip the stone or do serious damage to a weakened statue, but slicing it cleanly off at the neck isn’t going to happen since a sharp as the rim might get, there’s still more blunt force trauma that will be delivered than true cutting power, especially since such a blade is more than a little difficult to toss in an accurate manner.

In a sense, this is not unlike a giant metal frisbee, it’s only going to travel so far, and the duration of its flight is going to be highly dependent on the strength of the one throwing it. There’s no doubt that it can break through glass and do a fair amount of damage, but that’s about the extent of it since if one looks at the shape of Oddjob’s hat they’ll be able to deduce that the flight should be kind of difficult given that the brim is not perfectly straight and would alter the flight path. Of course, this is just begging for an argument with those that know more about this subject than I do, but common sense should tell a lot of people that this isn’t nearly as possible as it appears in the movie, simply because a lot of the weapons and devices in James Bond movies are cool, without a doubt, but they’re not at all realistic. Oddjob’s hat is by far one of those that looks like it would be an extreme and unforeseen weapon that could be used when an opponent’s guard is down, but the one-shot nature of it and the impractical design would work against it in a big way. Plus, just imagine wearing a big hunk of iron on your head for so long, that’s just begging for a sore neck at some point.

For any gamers that might recognize this hat design though, Oddjob was the inspiration behind a Mortal Kombat character, Kung Lao. The character, who many know, uses a hat as his signature weapon, as its brim is sharpened to inflict damage on his opponents, and unlike Oddjob’s hat, it does come back to him at times after he throws it. The creators of Kung Lao went even further with this since not only does the hat come back, but Kung Lao has used it in melee combat as well, and has used it like a buzz saw to carve up his opponents, as the hat obviously has a few magical qualities that Oddjob’s hat was lacking. Kung Lao’s hat was taken over the top in a few ways and in more recent versions of the game has even been altered to look more like a wheel of spikes to make it appear a bit more fierce. While Oddjob’s hat never underwent such a transformation it’s still well-known to many people since it is an iconic weapon in the history of pop culture. It doesn’t matter to a lot of people that it wouldn’t really be that great of a weapon since the design and the desired function of it is still something that people tend to marvel at. In the style of many Bond weapons, it does manage to get people to say ‘wow’ before laughing at the impossible nature of it.

One of the great things about fantasy weapons though is that they do make people think ‘what if’ and as a result, we tend to get things such as the hat that was made in the video. If not for movies, TV, and other hints of imagination life would be pretty boring, and we wouldn’t be wondering if such things like this could work. The answer is sometimes disappointing, but the idea that in some parallel universe it could work like this is still very interesting.