Home
Movies
The 10 Best Movie Gunfights of All Time 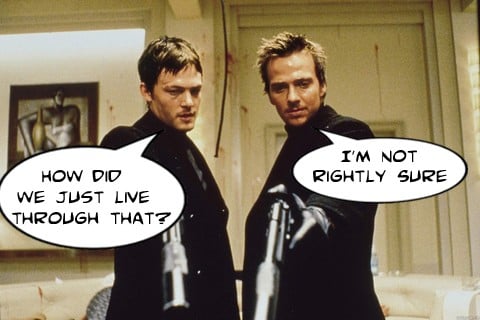 There are some moments in cinema that you never forget, and a lot of my favorite ones involve an unruly amount of firepower. These ten bullet-laden scenes have been selected for their status as iconic moments, but also there’s also a few that earn a place on pure style points alone.

In addition, I never judge based on time period or even technology.Â  You’re going to see a wide array of weapons and action in these clips.Â  It doesn’t matter if a scene takes place in the wild west of 300 years into the future, a great gunfight is a great gunfight whether it’s being fought with 44 Magnums or Ray Guns.

Here are my picks for the best movie gunfights ever.

One of the most famous gunfights in real world history, the onscreen adaptation in Tombstone made the legend come to life. Val Kilmer is a dead-eye as Doc Holiday and poor Thomas Hayden Church never had a chance. Tension breaks 4 minutes in.

The only shootout on the list where no one gets hurt, Arnold’s Terminator is under direct orders from John Connor not to hurt humans. But that doesn’t include their cars. Whipping out his trusty minigun (why do they call it that anyways?) he shreds the police cruisers until they all run away terrified. Human casualties: zero.

I really did hate Shoot Em Up, but I have to hand them the innovation prize to orchestrate a gunfight where the participant, Clive Owen, is literally inside Monica Bellucci for the whole thing. The video is a bit NSFW as you might imagine, but there’s no outright boobie action.

This is possibly the most unnecessary and over the top gunfight in movie history. What started as a bank robbery turns into a city-wide firefight with automatic weapons. The bodies pile up and you start to think that they really probably could have gone about this whole thing another way.

Before Robert Rodriguez was adapting graphic novels and banging Rose McGowan, he was making low budget action flicks like Desperado. If you don’t think this deserves a spot on the list, take a look.

There were a few clips from the often overlooked sci-fi thriller Equilibrium that could have gone here, but nothing tops Christian Bale and his gun-karate acrobatics in this scene. And there’s also a puppy! Aww. Shooting starts at the 3:30 mark.

4) Boondock Saints — Through the Ceiling

It’s probably the most clumsily executed gunfight ever, but also one of the most effective. The poor Russian mobsters never knew what hit them. Good thing they brought that rope eh?

Sure it’s not remotely based in reality, as any one man probably can’t take on an entire drug cartel for more than five seconds, but it’s still one of the most iconic gunfights in cinema 25 years later. And of course it’s paired with one of the most memorable movie lines to date, “Say ‘ello to my little friend!”

I had mixed feelings about Wanted as a whole, but my jaw was on the floor during this minute and a half that can only be compared in terms of awesomeness to the final scene on our list. It’s more a ballet than it is a gunfight. Check it out at the 7 minute maker.

Often copied but never duplicated, the lobby scene opened our eyes to action sequences we never envisioned to be possible. I’m not sure how many times I watched this clip, but it never gets any less cool. And nothing will ever beat the metal detector intro.