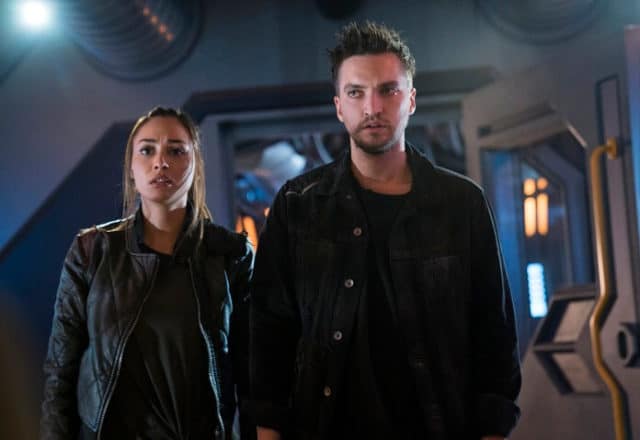 Sometimes, I don’t know how they do it. I don’t know howÂ The 100Â manages to keep things moving at a mile-a-minute pace while keeping the stakes so high. I realized, though, thatÂ The 100Â is one of the few shows that craft genuine reactions. I’m always hounding the other shows I review to take action and then react to that action within the world and characters they’ve created, but the shows I harp on seem to decide on a plot point, and then spin their wheels for a few episodes until they get there. Instead of that,Â The 100Â is bold. They know that (for example) the deal between Bellamy and the new group is flimsy and that the newbies will betray him…so they do it. They don’t talk about it for 3 episodes first. In essence, this is what I believe makesÂ The 100Â so special. But of course, there wasn’t a shortage of special moments in “Pandora’s Box”.

I know that I have some Bellarke fans reading my reviews, so let’s get some of those major developments out of the way first. I’m not much of a shipper (especially on this show) because I love to watch how things play out, but there’s certainly no denying the chemistry between Bellamy and Clarke. Their reunion was sweet. Bellamy’s feelings of guilt in leaving her behind washed away in the same fell swoop as Clarke’s vindication in knowing he’d come back one day. Bob Morley and Eliza Taylor are both excellent at saying things like this with their faces, and rarely have the two been more expressive with one another.

Perhaps the “Bellarke” reunion was the most anticipated, but it wasn’t the only reunion. The deal that Bellamy struck with the criminals, turns out, included a deal to open the bunker. So not only did we get a Bellarke reunion, but the remaining members of the Blake and Griffin clans also reunited. Both reunions were sweet, emotional, and long overdue. Bellamy and Octavia’s was particularly impactful, if for no other reason than Octavia later feeling betrayed by Bellamy for the role he played in their overtaking. Still, their reunion was a sweet moment between siblings.

Outside of the reunion saga, perhaps my favorite story was Kane’s. Kane took the fall for Abby, but uses the platform to protest how things are being done in the bunker. He longs for humanity to be better. In the world ofÂ The 100,Â where the morally grey and impossible choices run rampant, Kane wants to set an absolute. Of course, all of this happens before they discover the larger threat, who obliterates one of Octavia’s people. It will be interesting to see how his views evolve now that he’s way, WAY above ground.

Sometimes it’s hard for me to write these reviews because all I do is praise the show, but it’s honestly 100% better than almost everything else I’m watching.Â The 100Â races toward its future with no fear or hesitation, which not only exposes other shows for spinning their wheels or not having enough ideas, but elevates the material of this show.Â “Pandora’s Box” is the best episode of the season so far, but they’re trending upward so I expect the forthcoming episodes will be even better.

Reunions dominate the landscape as Bellamy and Clarke make a deal to get into the bunker to their families on this week’s compelling episode of The 100.