Home
The 100
The 100 Review: Season 3’s Penultimate Episode Races Toward The Finish 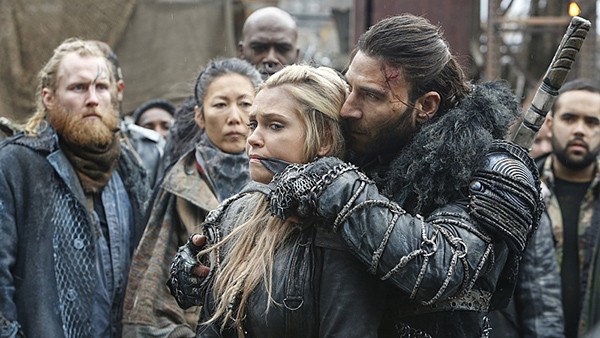 Admittedly, the beginning of this episode didn’t seem like much to me. It might have just been the mood I was in tonight. However, likeÂ The 100Â often can, the second half awakened me. I was predicting the plot as it moved along, but the second half reached the same conclusion in a much more compelling way than I could have ever contrived. And I loved every second of it. That’s the way thatÂ The 100Â reaches me over and over again.

This week onÂ The 100:Â Raven and Monty work against Alie from the computer, while working against one of their own who has joined Alie’s ranks. Clarke and Roan try to get to Ontari to put the flame inside her. Murphy, Indra, and Pike come to Bellamy and company’s rescue. Alie commits deplorable acts using Jasper, Jaha, Kane, and Abby.

The first part of this episode behaved predictably. Jasper was chipped and worked against his best friend Monty. Clarke tried to infiltrate and failed. We all knew that Clarke was going to end up in the City of Light, and I just figured that Alie’s endless torture of her mother or Bellamy would get the job done. My mind went to sleep when I had decided that, and I quit paying close attention. Until it didn’t happen. Imagine my surprise when Bellamy’s inevitable torture was stopped as Murphy, Indra, and Pike (perhaps the most ragtag crew thatÂ The 100 has treated us to yet) rescued Bellamy, Octavia, and Miller from almost certain death. When that happened, my brain was not only re-engaged, but I was actively excited about what was happening for the remainder of the episode.

For starters, the Season 1 bad boy team of John Murphy and Bellamy Blake was reunited in an instrumental action sequence. Though in the past they’ve had their differences, they’ve cast those aside in favor of a common goal. This was also pretty clear foreshadowing into the Pike/Octavia relationship. Though you never can tell with this show. Octavia may just decide to gank him no matter what. Anyhow, the character pairings and team ups have been such a “return to roots” forÂ The 100 this season, that it only fit Bellamy and Murphy have a long awaited reunion. It was exactly as action packed and glorious as I imagined it, too.

Once the second half of the episode was reached, the tepid pace of the show became a rapid, heart-pounding one. Someone had clearly turned up a dial on the stakes and it was by a lot. The story that Pike joined them created a lot of conflict and drama without distracting from the main action or goal. The small little moments with Bellamy, Octavia, and Indra really started to pay off the Pike story. It was barely even noticeable in all the action, but it added to everything and made it more compelling.

I’ve loved this season as much as others. I know it’s been controversial, but the Alie story has really paid off for the people who have stuck with the show. With a few exceptions, I’ve found the story to be as compelling and fearless as seasons past. For the last few weeks, I’ve felt the first slow in pace since the very beginning of the entire series, but “Perverse Instantiation- Part One” corrected all of that in a matter of minutes, and got me primed for next week’s season finale.

What did you guys think? Did you enjoy this episode? Excited or relieved for next week’s finale? Let us know!

Clarke, Roan, Bellamy, Muprhy, Indra, Pike, Octavia, Miller, Monty, and Raven all work to stop Alie in this week’s strong episode of The 100.