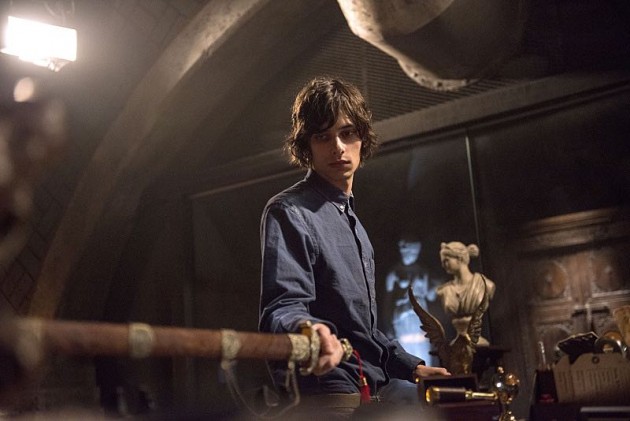 There are some times that I think that The 100Â just couldn’t get any more interesting. I will watch an episode and believe “Surely, this is a peak, and the next episode will take it down a notch.” The reason I think this is because on most shows, I’d be right. And let’s face it, I watch a LOT of shows. However, if there’s one show that doesn’t know how to slow down, it’sÂ The 100,Â and that’s not a bad thing. At. All.

This week’s episode follows Bellamy’s journey into the bowels of Mt. Weather, as he discoversÂ some unlikely allies along the way. Meanwhile, Clarke, Octavia, and the Grounders lose a soldier, but they gain a prisoner who just might give them the edge they need in the ongoing war. Jasper is promised to be released by President Wallace, but the promise is short-lived with mutiny afoot.

I feel like all I do on Wednesday nights is log on and rave about how greatÂ The 100Â is. I’m certain that I do that, but it’s not without cause. If you read my other work, you know that I’m fair but I always offer criticism when I have it. With this show, I constantly have none, so I have nothing to give but praise. Every week I try to take notes, and every week I’m ripped away because I cannot look away from the screen until commercial.

First of all, can we all give a round of applause for Eliza Taylor? (Pauses for applause) She is fantastic week in and week out, but she REALLY stepped it up a notch this week. I could feel all of Clarke’s emotions right along with her. I felt her frustration when Kane and Abbie shut her down, and I could sympathize with her as she cut at Raven with her words. I felt her confidence come back almost immediately when Bellamy called them on the radio. The best moment, however, was her ruthlessness when it came to the prisoner from Mt. Weather. When she cut his oxygen supply so he’d get there faster, her emotions were radiating. I think it’s a great sign when you can feel what a character is feeling along with them. Ms. Taylor always gives an excellent performance, but this one was a cut above the rest, and I must give her extra kudos. Every week she outdoes herself, and it is so much fun to watch.

The next people who deserve kudos are Bob Morley (Bellamy) and Eve Harlow (Maya). In yet another odd couple pairing, whichÂ The 100 seems particularly apt at writing for, Bellamy is rescued by Maya when she goes looking for Monty and Harper. The little moment in which Bellamy had heard of Maya through the grapevine due to Jasper’s affections was beautiful. In a mostly intense episode, they found a second to give us something sweet and they took it. I will be the first to say that I was not (originally) Maya’s biggest fan, but Harlow’s portrayal is layered and shown her true growth in the just the limited time she’s been there. I feel that, in contrast to Eliza Taylor, I rarely give Bob Morley the credit he deserves, but I have to say, he’s a fantastic actor. Bellamy is a character with a lot of courage, and it can’t be easy to give such an intriguing performance week in and out, but Morley makes it look easy. The scene when Bellamy discovers that he killed that little boy’s father is so heartbreaking, but a testament to the strength of both Bellamy’s character and Morley’s portrayal. Beautiful, beautiful work.

Additionally, I was very impressed by Devin Bostick’s Jasper in this episode. Jasper has always been a favorite character of mine, but he’s proved in the second season that he can handle a meaty story on his own. Admittedly, I was a little worried when Clarke left Mt. Weather, because I was afraid things there would get a lot less interesting. However, my interest was not only held, but increased ten-fold, thanks to Bostick and Christopher Larkin’s (Monty) work. My favorite Jasper scene so far was his confrontation President Wallace. It was BY FAR Jasper’s best scene to date, and really gave the episode some momentum starting off.

I was equally impressed by Raymond J. Barry (as I’ve mentioned before) in his nuanced performance of President Wallace. I was actually not expecting Wallace to be so easily swayed into helping Jasper, but I was pleased to see him as an ally…short-lived as that was. I also appreciate the imagery surrounding the (former…yikes!) president’s character. What follows is simply my interpretation of some of the visual storytelling, but I interpreted Wallace’s old and tattered suit to represent his way of thinking, which was seen as outdated. This image didn’t click into place for me until he admitted his lies to Jasper. I was even more intrigued by the image of him, still in the suit, in the quarantine area. The white room (seemingly) represented his good intentions and his tattered suit illustrated that his “outdated” (to quote myself) belief system was of no use to him now. Barry has been fantastic (if not a little creepy) and even though we barely saw him in this episode, what we did see had a lasting impact.

See? I have nothing bad to say. I’m becoming convinced thatÂ The 100 can’t have a down week. It’s constantly gripping and attention-grabbing, and the storytelling from episode to episode continues to beÂ excellent. This may have been the show’s best episode yet. I’m really impressed so far, and I can’t wait to see what happens next. The stakes are rising.