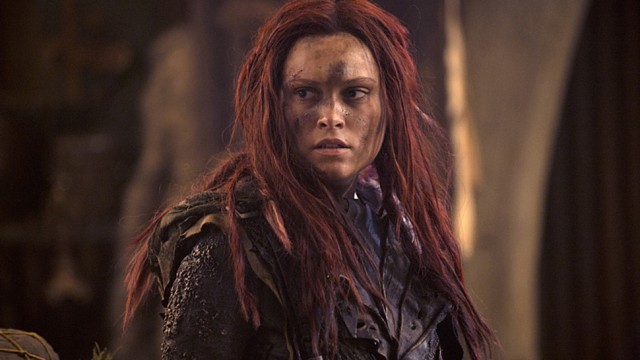 I’m so excited to be back onÂ The 100Â reviews for the much anticipated Season 3. It’s been almost a year since this show was on our screens last and let me tell you, it has been sorely missed. You always worry, though, that when your favorite shows return from a long hiatus that they will be inconsistent or different than they used to be. ButÂ The 100Â fans shouldn’t worry. They wasted no time in getting back to business.

This week onÂ The 100:Â Lincoln is becoming integrated with the Sky People, much to Octavia’s chagrin. Bellamy, in a new relationship, continues the search of uncharted territories for Clarke. Bellamy, Monty, Jasper, Raven, Octavia, and Miller set out on a mission, and they encounter men who turn out to be searching for Clarke. Jasper is on a warpath, still reeling from the loss of Maya. Raven condemns Abbie for trying to be Chancellor and doctor. Murphy is finally let out of the bunker he was trapped in, to find an “enlightened” Jaha waiting for him. Clarke attempts to keep a low profile. Kane, Indra, Bellamy and Monty set out to look for Clarke.

As you can see, there was a LOT happening in this opening installment ofÂ The 100.Â Sometimes, the show can be a little exposition heavy before the action gets rolling and doesn’t slow down. In previous seasons, it’s taken an episode or two, but Season 3 wasted no time at all getting back to it. The tense scenes really kicked off with Jasper getting grabbed by the two grounder men (and being hauntingly thrilled by it), and the battle that ensued between the two parties. Of course, I’ve always been gripped by this show, but this may be the quickest I’ve ever slid to the edge of my seat.

Devon BostickÂ gave an incredible performance as Jasper. This show has been party to some incredibly interesting transformations, but perhaps the most fascinating is Jasper from nerd, to warrior, to angry, grieving mad man. Bostick has risen to every challenge presented him, and promises to be one of the most interesting characters of the third season.

It’s hard to single actors out, because everyone was at the top of their game. Bob Morley, Christopher Larkin, Ricky Whittle, Lindsey Morgan, each of them brought something fresh to their characters and brought their “A” game to the episode. However, there is still one clearly compelling character who flies above the rest: Clarke. Now known as “Wanheda”, Clarke’s desire to stay hidden of course would not last forever (though her new red hair helped for awhile). In the meantime, she killed a PANTHER! Wow! Eliza Taylor brings a fascinating presence to Clarke. Even though Clarke doesn’t speak a lot in this episode (at least in English), Taylor perfectly conveys with eyes and mannerisms exactly what Clarke is trying to say. It was wonderful to see her again, and I’m so excited to see how that story plays out.

Showrunner Jason Rothenberg has managed to leverage the hiatus into an aching for this world’s return. I don’t know if I could have waited one more day. His affinity for building a rich and complex world, coupled with a fearlessness in the story direction, makes for extraordinarily compelling television. The constant shifting of character relationships and alliances adds just another layer to the complex and fascinating world that Rothenberg has built from Kass Morgan’s source material.

Once again, it’s a privilege to take a journey throughÂ The 100Â with everyone. It’s one of my absolute favorite shows (made my top 10 dramas of 2015) and it’s so easy to see why. The premiere proved thatÂ The 100Â still has plenty left in the tank, and plenty of story to go with it.

What did you guys think? Did you enjoy the premiere? Let us know in the comments!

The hunt for Clarke begins in The 100’s excellent Season 3 premiere.