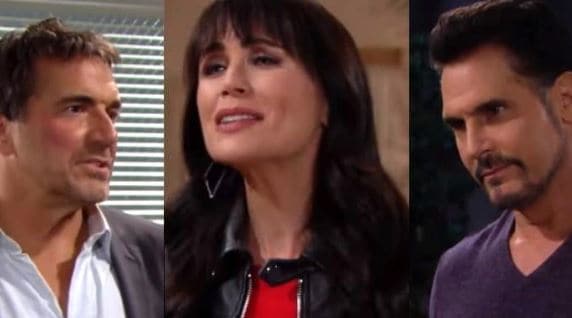 The Bold and the Beautiful fans are familiar with death. Some of our favorite characters never make it on the show, and that’s just sad in and of itself. However, some of them make it just fine — and we appreciate that, too. But there are always those deaths that just haunt us in a way we cannot even begin to describe. Not because we miss them. Not because they were so heartbreaking or sad. Simply because they were the most ridiculous deaths in the history of all things. If you want us to believe you’ve killed off our favorite characters, we need a bit more than just a casual death and some weird situation. We need someone to die in a real way that actually seems like death. This show is big on killing people in all the same ways, and that makes it a little bit crazy for us. Here are our three least favorite — or most ridiculous — deaths.

Remember that one time when Taylor was the doctor who took care of Ridge’s late wife, Caroline? She died when she was diagnosed with leukemia, and her death haunted everyone. We want to point out that this is one of the most believable deaths in the show considering the fact that she actually had an illness, went to the hospital, and passed on. She was someone that didn’t make it, but she told her husband that she wanted him to marry and be with Brooke when she died. And that was weird. But it’s also not the point. The point is that he then fell for the beautiful doctor who took care of his wife when she was at her weakest and sickest, Taylor.

We all know that he later married Taylor and they had a daughter together, Steffy. But Taylor was thought to have died in a plane crash, and we all had a difficult time with that one. We had a difficult time with that one because nothing of the story line worked for us. She wasn’t dead. She was presumed dead, and then everyone worked their magic to try and come onto Ridge, and it was all crazy and unfair and weird and all that stuff. We didn’t like it because it simply didn’t work. And when she returned from the ‘dead’ it was with a weak explanation.

Ridge has almost died so many times, but this is the most ridiculous of them. There was that time he was kidnapped after all that happened with Morgan. She tricked him into getting her pregnant to haveÂ  baby, but then the baby dies after she gets into a fight with Taylor. Shen then took Taylor and Ridge’s little girl, Steffy, and tells them she is dead and tries to raise the baby as her own. That didn’t work out for long when they found out this was not true, and they found her. But, when she has the baby and Taylor held captive, Ridge has to save them both. And that’s when things are good for him. Until, of course, a little while later when he falls back in love with Brooke and she falls for a shipping man named Nick.

When Nick and Brooke are kidnapped by Sheila — yet another deranged lunatic, he has to go rescue them, too. But he didn’t make it out of this one so well. He fell into a furnace, and it was thought that he was dead while he was in there. But it turns out he was not, and somehow he lived through it and the fact that Nick decides to help Brooke grieve by having sex with her right there. Ridge showed up three days later.

Things never really did work out for him too much in any capacity. He was a man who didn’t get much done in his life, and he was a man who was not really ever in a good place with anyone. For one, there was that one time that he was in the middle of a big fight with Quinn, and she pushed him off a cliff. This was not the first time someone had been pushed off that cliff, and it was not the first time someone was presumed dead and then came back from it. That’s why we have a hard time with it.