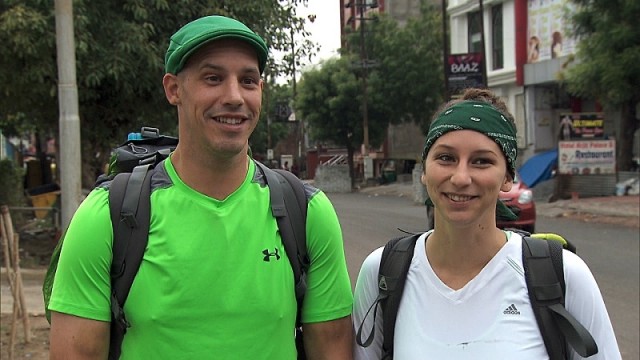 With four teams left and only three spots open in the final leg and race to a million dollars, it was do or die for the remaining teams in last night’s episode of The Amazing Race. As they’ve gotten closer and closer to reaching that goal, teams true colors have started to show and it hasn’t always been pretty. This week, the Green Team of Diana and Justin fell behind the other teams from the start, and we were able to see how they really run the race when faced with anything other than a giant lead.

This leg of the race took the teams to Hong Kong, China, where their first challenge was to either trace and cut out a design for a suit or find a working cell phone at a market and deliver it. Justin and Diana were the only team who took the cell phone rout and because of this, the other teams were able to get a jump on them. It wasn’t finding the cell phone itself that was the problem for the Green Team, but instead the fact that the place they had to deliver it to was only a few blocks from where they were. Not realizing this, they took a taxi which led them in the complete wrong direction, losing them a good forty minutes.

Realizing that the Green Team was behind them, this gave the other three teams a chance for once to take a lead and hope to take a first place finish. They next went to the Roadblock, which required one team member to join a water show and jump into the water, finding a gold fish and swimming it to a platform. Logan and Kelsey had no problem at all with this, finding the fish on their first try and quickly making their way to Phil. Surprisingly, it was Logan and Chris who reached Phil first, giving them a their first win of the season right in time for the big final leg. Once again, Kelsey and Joey took a disappointing second place, only this time it wasn’t at the hands of the Green Team. They’re still confident though that they have what it takes to win the first place in the one leg that really matters-the last one.

For Krista and Tiffany, this Roadblock did not go so smoothly, as Krista just could not find the gold fish that she needed to finish the challenge. It wasn’t long until Justin and Diana caught up to them and passed them by, Diana completing the Roadblock on her first try as well. They made their way to Phil but realized they had incurred a 55-minute penalty for taking the wrong ferry earlier in the leg. Not knowing this, the cheerleaders still refused to give up and Krista managed to finish the Roadblock on her fifth try. Unfortunately, a taxi ride that led them in the wrong direction from Phil and landed the girls just behind Justin and Diana, who were barely able to check in before they got there. Krista and Tiffany knew that they had been underestimated since the start of the race and were just happy to prove that they could make it this far.

Despite a third place finish and managing to stay in the race, it’s still not looking great for the Green Team right now. Every time they struggle even the slightest bit, Justin’s true colors come out, and he immediately starts blaming and mistreating Diana. Yet she still tries to please him, and when she managed to finish the fish challenge, she said that all she could think about was getting a hug and kiss at the end of it and putting the day behind them. While these two may seem to have a functional relationship when things are going right, when things start going wrong, they become incredibly dysfunctional. If the other teams can manage to throw them off their game in the final leg, I think we could easily see one of them take that first place away from Justin and Diana.

On the opposite side of the spectrum, Logan and Chris don’t even attempt to hide their dysfunction as it’s clear that these two have an interesting way of going about working together. A way that involves a lot of fighting and arguing, making it seem like they barely even like each other at times. Somehow, this has gotten them to the end though and if they can continue to make that dysfunction work for them, who knows, maybe they could end up winning.

From the start of the season until now, there’s been one team that has consistently impressed in both their ability to work together, communicate well, and achieve results. Joey and Kelsey haven’t fumbled once along the way and are the only team that hasn’t let the stress of the race get to them. After so many second place finishes, it would be amazing to see such a kind and functional team take home that million dollars. Anything can happen on the race though and it really is anyone’s money to win on next week’s finale.