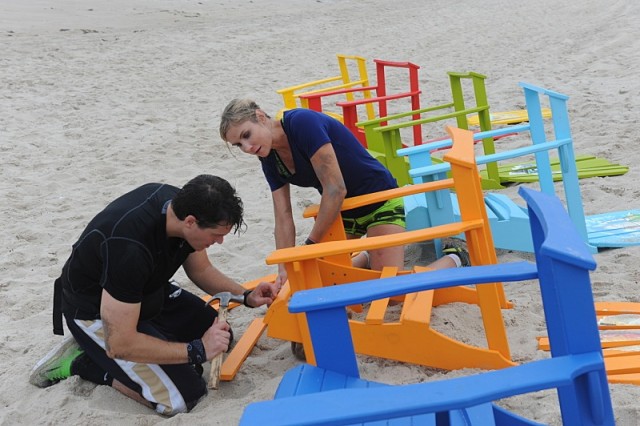 After a frustrating season of The Amazing Race, in which obnoxious couple Justin and Diana won leg after leg, the finale was surprisingly quite satisfying. While it was anyone’s leg to win, with all three teams having an equal chance at the million dollars, this final leg was really about which team could make the least costly mistakes. And in the end, it wasn’t the team that had won the most legs or spent the whole race overly confident that they’d win it all. Instead, it was the team that played it slow and steady, always finishing in the front of the pack but waiting for their chance to strike when it mattered most.

The final leg of the race took teams back to the states on the same flight with their first stop being in New York. Of course, Justin had to remind us that he spent years living in the city as he gloated about how easy this leg would be and how the other teams should be worried. Arriving at the first challenge, which required a member of each team to run a mock course to experience what it’s like to be a firefighter, Justin and Diana had the lead with Logan and Chris slightly behind them. All three teams made good time on this first challenge but in the end, this was the defining moment of the race not because of the challenge but because of one thing in the race that can make or break teams: cab drivers.

Justin and Diana made the major mistake, one that you wouldn’t think students of the race would make, by not telling their cab driver to wait for them to take them to their next destination. When they tried to steal Logan/Chris or Joey/Kelsey’s cab, they ended up chasing Logan and Chris’ cab driver away, with him claiming that he didn’t know where the next location was. But Joey and Kelsey were in luck, as their driver knew exactly where to go and refused to take any other team there. Realizing this, Justin and Diana took off to find a cab with none in sight. They ended up having to take a bus to a location where they could find a cab, setting them way back.

Logan and Chris were also frustrated to discover that their cab driver had left despite saying that he would stay and they quickly tried to highjack Joey and Kelsey’s cab, making it as far as getting into the cab before Joey and Kelsey came and kicked them out. Even if Joey hadn’t intimated Chris out of the cab, it looked like their driver was not planning on leaving without Joey and Kelsey as passengers. Unsurprisingly, this is when Logan and Chris’ bickering started, the only shocking thing being that it took them this long to start fighting. Logan blamed Chris for getting out of the cab while he insisted that the driver wasn’t going to leave anyway and that he thought their cab was still waiting. They too ended up having to take a bus to a cab and arrived at the next stop just before Justin and Diana.

From there on out, it was relatively smooth sailing for all the teams as they made their way through the rest of the leg. They made it through the physically demanding job of pulling up lobster crates and proved that they knew the race well by completing multiple memory challenges. Chris and Logan got stuck again on a task that required them to hang flags from the countries they’d visited in the order in which they’d been there. While the other two teams had been prepared, studying countries flags before the race, Logan and Chris had to play the guessing game, setting them back in third place.

Like so many other times throughout this season, it came down to Justin/Diana and Joey/Kelsey, the only difference being that this time it was Joey and Kelsey who had the lead on Justin and Diana. In the final challenge, which required teams to put together chairs, both teams felt confident that they knew what they were doing. Even with a few mistakes made by Joey and Kelsey though, Justin and Diana just could not make up for the time they lost due to the cab debacle. A final mistake on one of their chairs gave Joey and Kelsey the time they needed to fix their own errors and make their way to Phil, securing their only first place win of the race. If you’re going to win only one leg, the million dollar one seems like the one you’d want to do it on.

Naturally, even with Joey and Kelsey winning it all, the focus still had to be on Justin and Diana, who were very disappointed that they couldn’t win when it really mattered. If the rest of the audience is anything like me, though, it was very satisfying to see a deserving team like Joey and Kelsey win. They communicated well with each other throughout the race, never getting frustrated or blaming each other for mistakes. While Justin was cocky and obnoxious throughout the competition, Kelsey and Joey took it one leg at a time using their inherent likability to stay near the front of the pack. We obviously saw Chris and Logan argue a lot during each leg and saw Justin blame Diana every time things weren’t going their way throughout the race, and in the end, it was only right that the team that never blamed each other and stayed strong would win the half million dollars.