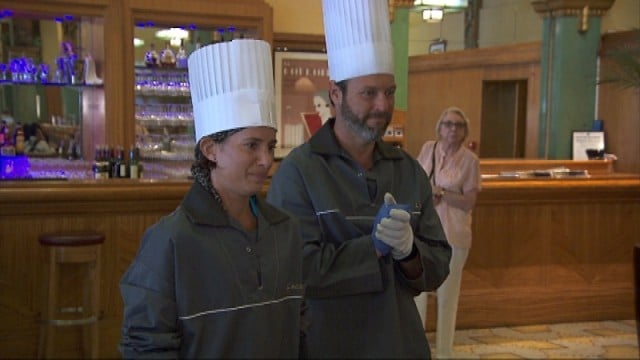 As some of the weaker teams continue to be eliminated, The Amazing Race is heating up with manyÂ teams falling into the traps of miscommunication and frustration, while others are content with laying low and taking it one leg at a time, enjoying themselves along the way. For rivals Tanner/Josh and Justin/Diana, the desire to finish in front of each other is still strong but they’d be smart to realize that they’ve got more competition than just each other. The past two weeks have proven that you can go from first place to last place quickly, and that perhaps the best approach right now really is to bide your time in the middle of the pack, waiting to strike until it gets closer to the end.

After having been given the Express Pass by Josh and Tanner, James Earl and Denise came in a surprising first place last week, one of the only times that either Tanner/Josh or Justin/Diana didn’t reach Phil first. However, their slight lead over the other teams didn’t last long, as this week’s leg of the race set everyone on even ground, all on the same flight to Paris, France. Once there, Justin and Diana retook the lead that they’ve become so comfortable with, but it wasn’t all smooth sailing for the engaged superfan couple this week.

Leg after leg, Justin has taken control and forced Diana into decisions so that he could run the race the way he wanted to run it, and finally, this is catching up to the couple. Diana is no longer okay with sitting on the sidelines and playing this Justin’s way, occasionally wanting to be the one to decide how they go about getting places or picking which Detour they do. With his obnoxious personality, Justin isn’t willing to listen to anyone else and has essentially been bullying Diana into doing what he wants to do. It was nice to see her take a stand this week and actually start presenting herself as a member of their team, not simply letting him drag her around everywhere. Justin may not be too happy about it, and in the end, he still did get his way, but it’s clear that Diana is no longer going to take his attitude.

Despite their fights throughout the leg, Justin and Diana did still somehow end up coming in first place. For their closest competition, Tanner and Josh, communication is still going well but they ended up behind Justin and Diana from the start, landing them with all the other teams on their way to the first Roadblock. A slight struggle with the Detour put them in fourth place this week but surely they’ll be able to pick up some ground in this “To Be Continued” leg. Other teams such as Tiffany/Krista and Cindy/Rick continued to prove that they’re still around for a reason and have what it takes to keep going. Even bickering couple Logan/Chris managed to stay fairly positive this week despite a major setback in the second Roadblock, a far cry from how they handled the stress last week.

The one team that I have my eye on as potential dark horses of this season is Joey and Kelsey. These reporters communicate incredibly well and consistently find themselves in the front half of the pack, playing it slow and steady and not drawing any attention to themselves. They’re one of the only teams who has managed to avoid the bickering and frustration that often accompanies the race and haven’t struggled with any of the competitions as of yet. They could easily make final three and pull ahead of our two frontrunners to take home the whole competition. While Tanner/Josh and Justin/Diana have started out strong, they may eventually become fatigued and the stress of constantly needing to hold their place in the front could get to them. It already has started to take a toll on Justin/Diana.

Proving that anything really can happen on the race, though, it was James Earl and Denise who struggled the most this leg of the race. With a confidence-boosting first place finish last leg, they were ready to take on anything, but after finding themselves unable to locate the Detour they wanted to do, they switched to the other one that required them to rap in French. Denise gave it her all but the pronunciation continued to prove too difficult for her. At the end of last night’s episode, they still hadn’t gotten it down as the rest of the teams already made their way to Phil. Little do Denise and James Earl know that this is a “To Be Continued” leg, and they’re not out of it completely yet. But they are going to have a lot of ground to catch up and in the end, it might not be possible.