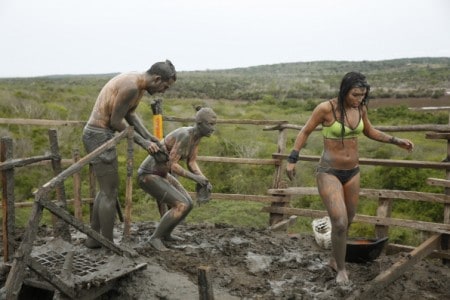 If there’s one thing the first two episodes of this season of The Amazing Race have proven, it’s that we’re not dealing with the smartest teams in the race’s history. Sure, there are a few teams that have been promising so far with Tyler and Korey being early frontrunners. But a handful of other teams seem to not know what they’ve gotten themselves into. All the teams this season have some kind of background with social media and Youtube, meaning they’re comfortable in front of a camera. But it’s going to take a lot more than that to win the race, as many of them are finding out.

The questionable decision making started in the premiere, with teams already considering giving up on tasks and taking four hour penalties, and it just continued tonight. Whether it was Cameron and Darius not being assertive enough to get a plane ticket or Marty and Hagan running to the beach instead of taking a taxi, it was these questionable decision that left these teams at the back of the pack. Especially at this stage in the race, it’s these little things that can often end you, and that was the case for Marty and Hagan. They would have easily between the boys if their taxi had been with them at the beach and by not thinking of this, it cost them the race.

Other nominees this episode for making unintelligent moves that they can be thankful didn’t hurt them too badly are engaged couple Dana and Matt. Apparently Dana did not know that emeralds are green, losing them quite a bit of time on the Roadblock this leg. We also got our first taste of bickering from a team this season, when these two argued at the Detour over how to best construct their tent. While Dana has a strong personality and can go from zero to ten quickly, Matt is more laid back. This creates an interesting dynamic for them, one that could end up hurting them in the future. But hey, at least they didn’t pack both a hairdryer and a curling iron but forget to bring a bathing suit like one team did.

While some of these teams look like they may fall quickly out of the race, there are other teams that appear to be there to stay, at least for a little while. Tyler and Korey are at the top of that list, taking second the first week and securing a first place win this week. They communicate well and are fun to watch together, providing both competitiveness and likability that could get them very far in the race all the while keeping it entertaining for the audience. It’s really no wonder that they’re so popular on Youtube.

Brodie and Kurt seem to be their biggest competition right now, based soley on athleticism but these men have already proven that they’re capable of making small errors that cost them some time. I’ve got my eye more on Burnie and Ashley. While not as young as other teams, these two are smart and work well together and they could easily be a dark horse this season. No matter what happens, these first two episodes have proven thatÂ we’re in for another fun season full of fights, make-ups, and successes.

Some teams make some questionable decisions while others pull ahead in this week’s episode of The Amazing Race.