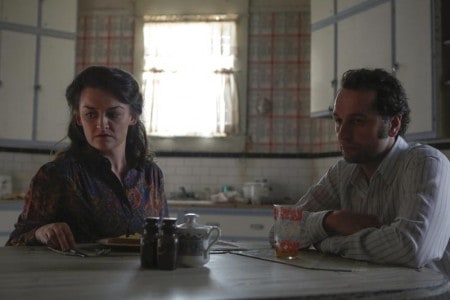 Martha packs her purse, clatters down the stairs, threatens Gabriel. She disappears into the daylight, walking away from a crippled old man, trying to find a place that makes her feel safe again. She’s so sure that Clark is dead, or gone, that she’s ready to flee both the KGB and the FBI. There is nothing else here for her, if Clark isn’t with her.

She’s put them in a bad spot; she’s given Elizabeth and Phillip little choice. But it’s also Phillip’s fault; he comes into her room, and doesn’t wake her. He find sleeping pills in her bag, or at least some form of sedative, and the only thing that he does is take the gun from her purse. It’s a strange sequence of events, to say the least; I almost think, (I wonder aloud), if Phillip hoped that she’d never wake up. Him taking the gun suggests that he’s afraid that she’ll use it, but there is no way for him to tell if she’s actually just sleeping, or ingested enough sleeping pills to kill herself.

He doesn’t even check, really. He just looks at the bottle. He takes the gun, but he doesn’t take the pills? Whose safety is he worried for?

Phillip, I think, for a moment at least, wished that Martha was drifting away. I think that Phillip hoped that Martha would just die peacefully; not for his sake, as much as for hers. There is no way Martha, should they recover her without putting a bullet between her eyes, will survive in Russia. She’s a time bomb; she’s a sniper with the crosshairs trained on your forehead. It was only a matter of time before Martha fled the safe house, and it’s only a matter of time before she starts making deals with other countries to escape the never-ending snow and unfamiliar language.

Of all the branches, and all the options, and all the ways forward, the only one that grants Martha any peace is the one that begins in a shovel and ends in a shower of dirt. 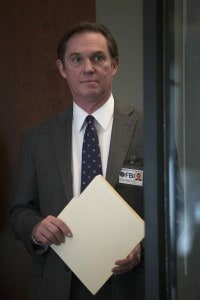 You’d feel sorry for Agent Gad, if you didn’t hate him so much.

It’s not in him to recognize the ascendance of a Stan Beaman; it’s not in him to notice his charge’s continued flaunting of the rules. Stan and Aderhold were running a covert OP on Martha for a long enough time to spook the KGB, and Gad didn’t know a thing. He never saw Stan’s growing influence, and power, and instead of pushing back, he hung his head, and moved on.

No, Gad’s failure is that he cannot imagine a world that he isn’t in charge of. He can’t see the bigger picture, because at his core, he is just another paper pusher. He was promoted because of seniority and maybe a few good busts, but he’s no Elliot Ness, or Melvin Purvis. He’s just a guy in the right place at the right time.

It’s his lack of imagination, and lack of foresight, that lead to Martha’s growth into a KGB agent. That pen is planted in his office, and he doesn’t immediately suspect Martha? Who else has that ease of access? Who else could walk into his office, and have an entire room full of FBI agents go on with their day? Martha being the KGB mole is the least surprising thing that has ever happened to Gad.

He keeps on trucking, though. He keeps on keeping on. Investigations come and go, but Gad is forever. He’s enough of a bureaucrat that he can weather storms that would drown most. He’s so pathetic that even Stan takes pity on him, and nobody has exploited the weaknesses of others this season more than Stan. 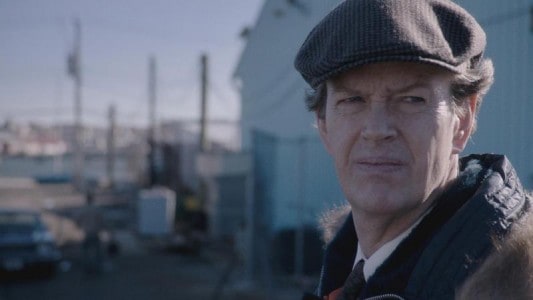 The Titular Rat, stuffed in a jar, and then stuffed into a refrigerator. How bad could one rat be?

The bioweapon plot almost feels like it’s on a different show; some network drama about submarines or nuclear missiles or something. It’s an end of the world type thing; a big picture, universe ripping type thing. If that biological terror were to be released onto the United States, and it were traced back to Russian operatives, half the world would be irradiated glass in mere hours.

That’s notÂ The AmericansÂ we’re used to. That’s a much bigger stake at the forefront of the show than we’re used to. The Cold War between the US and the USSR is a big, life-changing event, sure; but that’s always been in the background, as an uncomfortable murmur, or a kid tugging at your shirt sleeve. To have it so close, and so present, and so unbelievably dangerous, really puts a damper on everything going on around it.

I wonder if that is the point. I wonder if this glanders sample represents a step too far. It’s one thing to steal submarine propellers, but it’s another to prepare for biological warfare. We’ve been living in terror, cowering at the idea of weaponized sickness, since the first Man coughed the First Cough. We’ve endured more pandemics than you can shake a stick at, but a pandemic in the age of nuclear weapons and pinpoint accuracy means that what’s left behind is a smoking crater; Look onÂ my Works, ye Mighty, and Despair!

They’ve been trying to get this infernal thing out of the country for the majority of the season, and have suffered one failure after another. Failure breeds desperation like waste breeds rats, and soon they’ll come across a situation both too risky and too important to ignore. They’ll be walking into the Lion’s Den, and they’ll have to pretend to be something other than a tasty snack.

Congratulations, Jennings family. Your mole is on the run, you have a bioweapon in the freezer, and your daughter’s preacher knows you’re Russian spies. On the bright side, things can’t get any worse than they already are.

Martha takes flight, Gad gets grounded, and The Rat Is In The Fridge in tonight’s The Americans.