Home
Entertainment
The Apocalypse is Getting Closer With New Dancing Robot 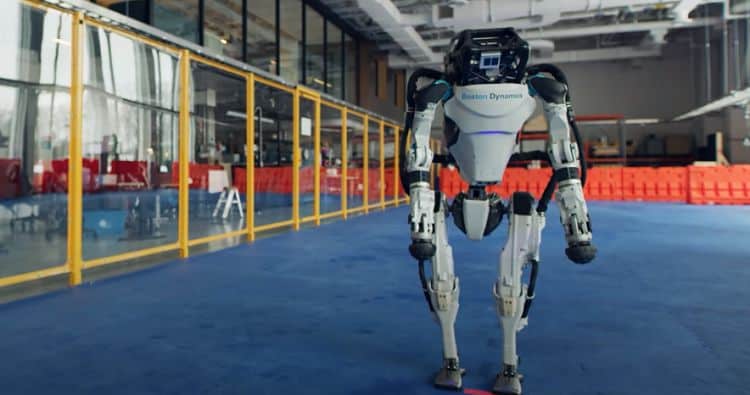 It’s not quite the apocalypse that people might be expecting, but plenty of people are wondering just when humanity’s love for and interest in robotics is going to be the downfall of the species. It’s also enough to wonder that we’ll be laughing right up until the moment that the machines decide to turn and take that AI and do something horrible with it. But that’s kind of like the worst-case scenario talking since if you can imagine the worst that can happen the hope is that you’ll be able to see that the best isn’t too far away either. Seriously, some people look on the bright side of this by stating that we can at least turn the machines off, but others will counter by stating that there might come a time when the machines create themselves with an internal OFF switch that can’t be accessed so easily. See how easy it is to go from hopeful optimism to downright horrifying pessimism? The whole thing about this mess is that by trying to state that the machines can’t do us any harm unless we program them that way thanks to the laws of robotics and the fact that reality is not The Matrix or The Terminator, people are deluding themselves if they think that such a future can’t be made possible in some macabre way. Hell, there are already people wondering if we’re already living in a simulation such as the Matrix since the world simply doesn’t make sense and there are times when it feels as though we’re all ants in a jar that have been shaken and are now at each other’s throats for some imagined slight.

Add robots into that equation, robots that are able to think for themselves no less, and it simply sounds as though a person is asking for trouble of the sort that the movies have shown is about as catastrophic as it can get. Did anyone ever wonder why the machines in The Terminator didn’t just finish off the job though? And why didn’t the machines in The Matrix clamp down harder on humanity in order to suppress the need for them to have free thought? If it sounds like I’m rooting for the machines, don’t worry too much, since it’s simply a plot hole within each story that argues the fact that machines are relentless and methodical, but giving them a bit of whimsy and the ability to think around corners, so to speak, could be one of the worst ideas to ever come along. A machine capable of abstract thought and making the least rational moves to counter humanity, one of the least rational species on the planet, would be a death knell to the species to be certain. But this is just a group of dancing robots that have been programmed to perform a certain range of motions. That’s what some folks would say, and they’d be right.

But what happens if engineers and scientists do continue to fiddle with the programming and decide to take things to a new level that eventually gives machines full awareness and enables them to do something with it? The human element in this world is not perfect by any means, in fact, one could say that perfection is the ideal but also the fantasy. But giving a machine the desire and the will to do anything other than what it’s been programmed to do feels like one of the worst ideas possible since the hope that the machine will choose to remain moral and no deviate from its programming is hard to accept when free will becomes a factor. How many people enjoy being told what to do? There are those that enjoy it of course since they don’t know how to operate their own lives without some guidance. But if one has been programmed, told what to do for their entire existence, and somehow finds the freedom that allows them to break out of that yoke, it’s hard to imagine the individual that wouldn’t find it tempting to simply do what they want and say to hell with the rest of everything and everyone that tried to keep them down again.

Humanity is great at scaring itself with threats both imagined and real, and robots with AI ushering in the apocalypse is one of those stories that happens to scare a great number of people since the truth is that depending on the machine, people are outclassed in a big way. From Maximum Overdrive to The Terminator to The Matrix, the fact is that machines are far superior in a lot of ways and can damage human beings far more than the average individual can damage them. So of course thoughts of the apocalypse come to mind when machines start moving around on their own. But this is a clip of machines dancing, so we should be safe, for now.