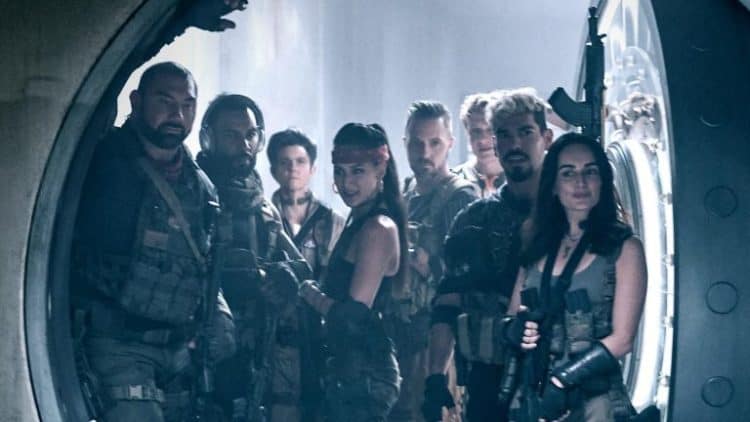 The upside of Army of the Dead at this point is that Zack Snyder has already made it clear that there will be NO Snyder Cut here, as the audience will be getting everything that Snyder has to give. I’ll go ahead and say it though; someone is still going to ask for a Snyder Cut after hearing about the joke that didn’t make it into the movie. Don’t be too surprised at the cynicism or the prediction when it comes to what might happen after the movie, since asking for a director’s cut these days is like asking for something extra in a restaurant, people simply KNOW it’s there, even if the chef has to whip something up on the spot and call it their ‘special sauce’. In any case, Snyder has made it clear that Netflix didn’t bother collaring him when it came to the content of the movie, save for one particular gag that might have lasted all of a handful of seconds before never being seen again most likely. It involved a male stripper zombie that had a bite taken out of his naked penis, and while it would have been a bit comical and definitely disgusting, Netflix had to give it the no-go. If people seriously want to call for a Snyder Cut just for that then they’ve proven, once again, that they’re a little more deranged than is necessary. But even more interesting than that is the fact that Snyder has taken the classic zombie formula and worked with it in a way that is definitely different, but also feels as though he’s mashed all of the zombie movies he could find into a blender and hit the button to see what might pour out. Thankfully it does sound as though it might be kind of interesting since there are going to be zombie creatures, robot zombies, however that’s going to work, and alpha and shambler zombies. The explanation for both are pretty easy to figure out, but Snyder still managed to comment on it via MovieWeb:

“[We] have two categories of zombies in the movie, alphas and then normal shamblers. [If] you see a zombie movie, normal shamblers, it’s like a normal zombie, they kind of move slowly. And then our alphas, which are an evolved version of zombies and zombies that have taken another step, and they’re much… they’re fast, and we kind of treat them kind of like almost like wolves or like, they’re not… they’re sentient, you know what I mean? They kind of, they fight [in] packs and they kind of have a pack mentality.”

So in reality it does sound as though Snyder couldn’t pick one type of zombie, or simply wanted as many as he could get, and here we are. To be honest it sounds interesting since the likening of the creatures to wolves is kind of interesting since it might indicate that the shambles are more like the dogs that depend on the wolves to find sustenance for them, but are no less deadly for it. That does bring to mind an interesting picture, especially the idea of zombie evolution since this kind of theory was kicked around on The Walking Dead for a short while when the Whisperers first arrived, but it was still debunked in a big way since the thought that what’s dead is going to stay dead and not evolve was one of the arguments that couldn’t really be ignored. This kind of debate could go on and on, but the thing is that once it becomes an idea for a movie or a TV show the chances are good that the theory of the dead evolving in some way is going to work because the writers and director need it to work, plain and simple. Those looking for common sense to emerge triumphant in a given movie are those that might not watch movies that often or somehow remain hopeful that something will happen one day that will convince the directors of fiction movies to live by the rule of logic. If that’s the case then it’s likely that said people will be waiting a while, since zombie movies aren’t exactly a place for rational thought when it comes to forming a script.

Army of the Dead comes out later this month, and already it’s looking like something that might please quite a few people or possibly give others something else to say about Snyder’s overall choice of story. No matter what’s said it’s enough that it’s giving people a different look at zombies since combining the slower and quicker undead is something that one doesn’t see that often, if at all. The cast and the story look interesting enough to give the movie a look, and anyone saying they missed out on the male stripper zombie with a bite taken out of his wang might need to see a specialist.