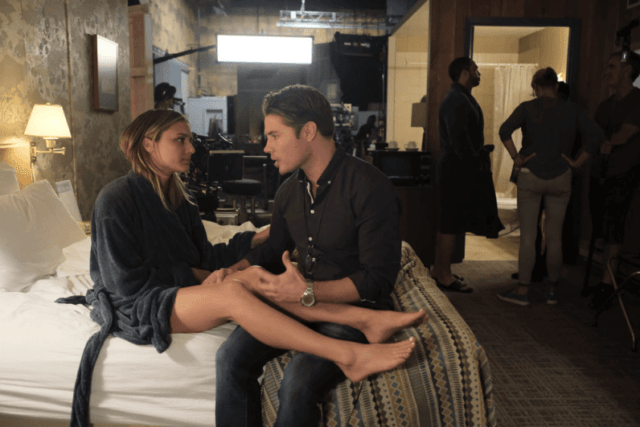 At the end of last season of The Arrangement, Megan Morrison made a bold statement. She promised she would burn down the Institute of the Higher Mind, no matter what. She even laid out a game plan at the beginning of the season, going so far as to know that she would need to establish her own career before she pulled the trigger on her plan. Yet nothing has happened. In the push to take a big step forward, not only does Megan take a big leap backwards, she leaves us wondering if she knows what she is doing.

Deann is still reeling from the loss of her girlfriend, which Terence doesn’t know about. Megan is there for Deann a little, but Deann needs to feel like she is doing something to get through the grief. So she reaches out to her girlfriend’s son Wes. After a few awkward moments, particularly an awkward smooch, they end up having a good conversation about the unconditional love between a mother and a child. Though it may not be the right time, Deann decides she wants that. Terence has been trying to convince her to have a child, and the logical argument could be, if not now, when? Terence and Deann’s unique marriage aside, Wes will be sticking around. Is that a good idea?

For once, Kyle is the one feeling the pressure in the relationship. The early testing numbers for “Technicolor Highway” do not look good, and to top it off, neither the ones from Kyle’s latest movie premiere. Instead of trying to fix the problems at hand, Kyle is walking around like everything is going to work itself out. In reality, he is masking the pain of failure, and trying desperately to make sure everything going forward works out better. He doesn’t actually feel better until he talks to Megan. The weight off his back really reflects in his directing. Watching Kyle open up inspires Megan to do the same, to a point. She reveals that Terence found her father, and her struggle with whether or not to confront him. Recall that Kyle has a similar story. The official story of his orphanhood is a lie. His father only just died last year, and while Kyle paid for end-of-life care, he didn’t waste much energy on the man. So it’s no surprise that Kyle tells Megan to forget about her father.

Megan is keeping her emotions in check, but she’s also anxious that she hasn’t made much progress gathering information against Terence. Desperate times call for desperate measures, which is where her ex-friend Hope comes in. Hope is the one person Megan should not trust. She did once, and Hope chose to sell her nude photos on the Internet because she was jealous. Megan meets Hope anyways, and surprise, it’s just another setup. Worse yet, a very public setup that Terence finds out about.

Shaun is rightfully upset that Megan risked so much for the both of them. Anything that makes Terence angry also puts Shaun in his crosshairs. I’m not sure what’s scarier, the idea that Terence could go after Shaun or that she is slowly being sucked into IHM’s practices. For that matter, the same statement applies to Megan. Just when Shaun asks what exactly Megan’s plan is, Hope’s contact shows up in Megan’s trailer. He offers to tell Megan everything he knows, and she turns him down. She makes a lot of big statements, but it’s clear Megan has no idea what she’s doing.

Was Megan’s move apart of a larger plan, or has she given up?

Megan makes several mistakes in her quest to end The Arrangement she has with the Institute of the Higher Mind.