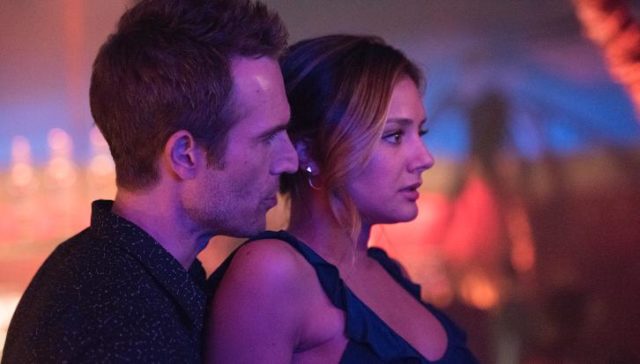 The Arrangement just keeps heating up, with a dangerous game of cat-and-mouse that isn’t letting up. The further Megan digs into this dangerous game she’s playing with Terence, the further down the hole she goes. Curiously enough, the stakes are just as high for him as they are for her. Terence doesn’t have to walk some thin line because he is the embodiment of creating your own narrative. But just who is manipulating who here?

The first table read of “Technicolor Highway” does not go well. With Megan’s co-starÂ Xavier Hughes overacting, and Megan herself a little flat, the first session is anything but spectacular. This puts more pressure on Kyle for his directorial debut, and even more pressure on his relationship with Megan. With Megan working exclusively with Terence, Kyle focuses on getting Xavier on track. That ends with Kyle breaking up a fight in a bar, but honestly, things could have been worse.

Shaun has really stepped up to play her part in Megan’s plan. She’s been handling the negotiations for Terence’s ambitious First Life Initiative, intended to reach a younger generation of IHM candidates. That is a scary thought in and of itself. Shaun is seeing a lot more of the business, and watching Terence’s frustrations and negotiations only helps her cause. She is also the first one to see that Terence is falling apart. Megan is able to use that.

Megan knows that Terence’s fear is directly connected to his pride. In order to properly manipulate him, she has to stick to some variation of the truth during their private sessions. She is 100% honest when she says she is afraid of him. The deviation is her claim that she is afraid of disappointing him. We all know Terence is capable of so much more than disappointment. Megan’s revelation is enough for Terence to lower his guard a bit. A little more talking over french fries, and Terence reveals a whole lot more. Not only does Terence have some painful childhood memories (duh), he tells Megan about his mugging. Keep in mind, Deann doesn’t even know this happened to him.

Not that Terence’s wife has been observant enough to notice her husband has been off. Her affair has kept her pretty busy these days. But what happens when her partner bails on her, and then dies? And what happens when, inspired by a conversation he had with Megan, Terence decides he and Deann should try to have a baby? Talk about a one-two punch.

Terence and Megan continue to spend time together until he gets to the root of Megan’s anxiety. Quite frankly, that whole sequence in the club was terrifying. In addition to the fear that Megan would say something to tip Terence off, their conversation was weighed with so much emotional anxiety, for Megan and for the viewers. What’s worse is that Terence actually does find the root of Megan’s anxiety: her abandonment issues which stem from her father. This revelation actually helps Megan’s performance, and re-balances her. Even better (or worse?), Terence finds Megan’s father, just in case she wants to contact him.

So is Megan still playing Terence, or has this game of emotional manipulation taken a turn?

Have the manipulative games on The Arrangement just been turned?