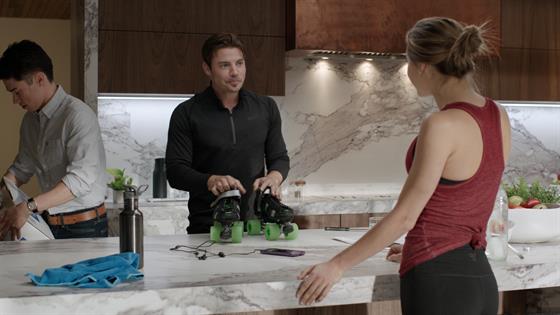 The Arrangement is getting dangerous, and I’m loving every minute of it. Call it soapy, call it overdramatized, but desperate people in desperate situations trying to keep everything together is good television. More than that, this show is impressive in that it ignores all the normal standards for stigma that scandalize the rest of the world, but fit right into the entertainment industry. The bottom line is that the price is high for a pretty picture, and sometimes the cost is downright repulsive.

Kyle’s ex-fiancee Lisbeth comes back onto the scene, and boy does she cause a ruckus. She may have left Kyle, but that doesn’t mean she is over him. She goes on national radio to tell the world that Kyle is the love of her life. In spite of himself, Kyle can’t help but be affected. It doesn’t help that Lisbeth follows up on her grand declaration in person. It’s uncomfortable, but Kyle comes out it sure that being with Megan is right.

Deann is having problems with Annika. The girl is one bad hit away from being a psychopath. Yet Deann might need the unexpected since she spends all day cleaning up other people’s incompetence and excuses. At least Deann’s risque business won’t put her behind bars. Terence can’t say the same. The cops have been circling the Institute for some time to prove that Terence ordered Kyle’s last therapist killed. For the record, he only asked that he be rehabilitated. Once Terence realizes what one of his students has really done, he tries to get him to take responsibility for what he has done. It’s only slightly manipulative considering the guy did do the crime. Even the all knowing, all seeing Terence couldn’t see that he would end up in a car with a man who was suicidal.

Terence could never have imagined the price for making that scandal go away. He would have paid any amount of cash short of giving up the Institute to avoid what Detective Gaffey really wanted. I thought the look on Kyle’s face when Terence asked him to pimp himself out was horrible enough. It doesn’t compare to the haunted, broken look in Kyle’s eyes when it’s done. His bond with Terence, the Institute, and even Megan, will not be the same after this.

Leslie warns Megan that she needs to shut down whatever artistic connection she has with her play’s director Nick. That’s a little difficult to do when two days before the play’s opening night Nate decides that he and Megan should run away together. That kind of talk is for Disney, not Hollywood (literally two different cities in case anyone is wondering). Megan can’t explain that to Nate before her car is rear-ended by Terence’s henchman. Kyle is able to replace Megan’s car with a new Maserati, which reminds Megan that Kyle is a wonderful, generous person. She shouldn’t give Nate a second thought since he has no intention of thinking long term, and Kyle does. Unfortunately, Kyle gets to hear how wonderful he is just as he is imploding. He is so proud to be with Megan, and knowing that he just risked that changes everything.

Were you shocked by the lengths Kyle was asked to go?

Terence gives Kyle a disturbing addendum to the Arrangement they have with each other.