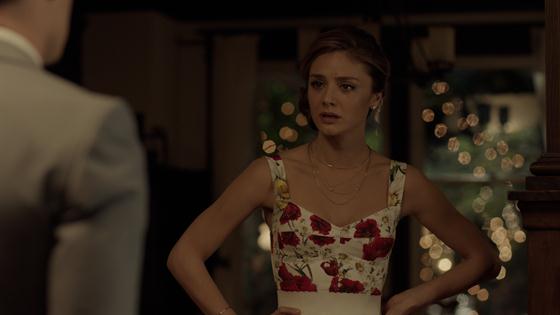 Kyle and Megan are on a surprisingly analogous wavelengths these days. The good news is that their closeness is fundamental to their arrangement, but it is because everything else in their lives has become so unhealthy. Both of them are running from something. This week on the Arrangement, Kyle runs away from his problems straight to Megan on her trip back home. It’s ironic since Megan’s home is exactly where her most deeply rooted problems are. How they handle getting to know these deeper parts of each other will define Megan and Kyle’s relationship moving forward.

Pimping him out was Kyle’s last straw with Terence. He can’t spew the same Institute spiel and expect Kyle to return this time. It’s the one time Terence doesn’t have an answer, so he takes a trip of his own. You’d be surprised what other alternatives to meditation there are. Terence ends up taking the day to visit his own therapist, who gives him a medicinal push to delve into his subconscious. Terence doesn’t just want to control Kyle’s life, he wants to be Kyle. To be the one that everyone reveres and bows down to is everything. Part of Terence’s problem is that he’s trying to control everything, which is how he got to the point where things fell so out of his control that he had to sacrifice Kyle. Things have to change if he wants to hold onto the things he does have. Once he lets that sink in, and gives Deann complete creative control over Kyle’s career, he does seem better. Even I was halfway into his speech in the Institute therapy session.

There’s something really beautiful about seeing Megan and Kyle outside of the Hollywood environment at first. They don’t have any pressure to be anything but themselves, whoever that may be. Megan’s friend Tessa and her family love them for exactly who they are, no acting needed. To top it off, Megan gets the news that she’s going to be reading with the star of her favorite childhood film. Officiating her best friend’s wedding makes Megan feel more grounded and honest. However, she can’t ignore how much her life has changed, and is even a little sardonic about it. Megan even has an ironic moment talking about Kyle where she says “It’s not like I have it in writing.”

It’s more difficult being home when Megan has to confront her past. She runs into her stepbrother’s ex-girlfriend, who has no idea he molested Megan for three years when she was a child. Tessa was the only one who knew, until Megan works up the courage to tell Kyle. He doesn’t try to prod answers out of her, he doesn’t even try to comfort her. All Kyle does is stay quiet, stay close, and tell her he loves her. There is no safer feeling in a relationship than being allowed to feel however you need to feel. Since Kyle knows more about shame than Megan realizes, he can only hope that she gives him the same consideration when the time comes for him to confess his sins. By the looks of Kyle’s house upon their return, it sure seems like someone wants to remind Kyle he has skeletons.

Who do you think is trying to get Kyle and Megan’s attention? Does it seem like they have a stalker?

This week on the Arrangement, Megan opens up to Kyle about a secret, but will his fallout with Terence lead to honesty with his love?