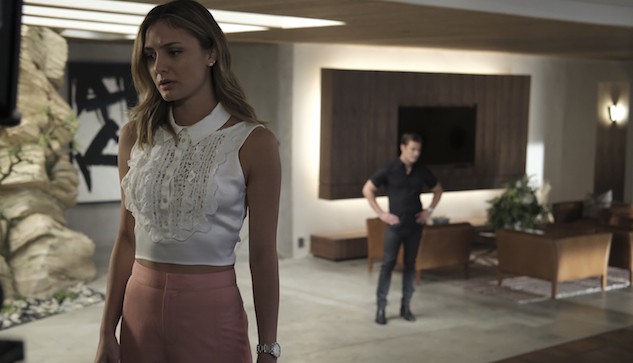 If you haven’t already been hooked by The Arrangement, go back and rewatch Season 1. Because Season 2 is going full steam ahead, and like Megan on her mission, this vehicle isn’t stopping for anyone. Megan Morrison thought she’d walked into a dream when she fell in love with superstar Kyle West. But she emerged from a nightmare, and only when she was allowed to. Thus, Megan’s Season 1 ending promise to “burn the whole thing down”. The opening hour of Season 2 proved that the show is just as timely, unapologetic, and meticulously crafted as it was for Season 1. But the question constantly hangs in the air. Megan has the acting chops, but does she have the heart and perseverence to follow through on that promise?

Let’s start by pointing out who is, and isn’t, going to be in on Megan’s plan. Her agent, Leslie, is rightfully upset at being pushed out of her own client’s affairs. On the surface, it looks like Megan is leaning into the Institute of the Higher Mind’s proclivity towards isolation. That is exactly what Megan is doing, but for another reason. At first, Megan needs to keep a tight lid on what information Leslie is privy to, especially if Megan is going to trust her with looking for Kyle’s ex, Lisbeth. Megan is a bit harsh with Leslie, but it’s a small price to pay for keeping Leslie safe. She has been a good agent to Megan, looking out for Megan much more than a lot of others would have. It’s a precious thing in Hollywood to find someone who will always have your best interests at heart (Hollywood Social Commentary #1).

The only person Megan has looped in to her plan is Shaun, and that was out of necessity. Shaun has very specific access to the Institute now that Terence has looped her in as legal counsel. To her credit, Shaun is doing an amazing job. She’s still 100% committed to her work at the Institute, but she will be working to get back into her ex’s good graces. This is the ex who has access to the place Megan was held prisoner, so playing nice is vital. But Shaun is not the actress Megan is. I worry that there is only so much she can do, and only so much she should know. Even she acknowledges that she can’t run point on this mission. This is all Megan.

It proves to be more difficult than Megan imagined. It’s difficult because there is a part of her that still loves Kyle. I say part for now, because the kind of love they had is so loaded by outside forces, and it has been from the very beginning. There is only so honest they can be with each other, and it hangs like a dagger over their story. Kyle can be incredibly sweet. Any little girl watching Megan try on her wedding dress for the first time would think so. But every single aspect of the wedding is controlled by the Institute of the Higher Mind. The most important moment of Megan’s life is not her own. She is in the public eye, so her big day belongs to everyone else (Hollywood Social Commentary #2).

For as long as Kyle has been in the public eye, he should be used to that. But in an effort to exercise his voice on his new script “Technicolor Highway”, he gives it to Terence. I hate to agree with Terence on anything, and I do mean anything, but he has a point. Kyle is so sure that people will come to see the film, regardless of the extent of his involvement in it. But that’s not always true. It is far easier to get butts in seats for a mediocre film with a known actor than for a fantastic film with a lesser known actor. There are exceptions, but that is the general rule in the numbers game. Kyle can’t stake all his hopes on this film, and though he doesn’t know it yet, he can’t stake all his hopes on Megan either. 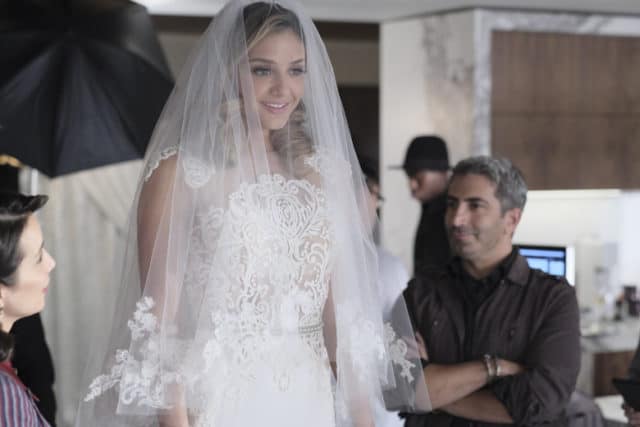 The pretty smile on the girl in the white dress is genuine. She looks every bit Hollywood’s princess. Even Deann is moved enough to give Megan her mother’s bracelet. Though why Deann thinks something she wore on her wedding day to a man she has an open, college-like sock-on-the-door relationship with, would be good luck, is baffling. The first time we see Deann truly genuine and happy is when a mystery woman who she hasn’t seen in a year walks through the door. We’ll get more info on her later.

Leslie stands up for Megan when Terence and the studio executives change the entire ending of the film, completely invalidating the story. Leslie dares to tell everyone that they are leaning into an outdated stereotype, that the critics will gun down the ending like the cop-out it is, and what does she get? A man calling her hysterical. (General Social Commentary #3.) The whole experience makes Megan physically ill. And she finally breaks a little, letting Kyle have it for not speaking up at the meeting. But all he feels is relief that Megan is finally saying something that doesn’t sound generic. And their conversation is as honest as it can be given Megan’s long-term game. If they were in a different place have this same conversation, maybe it could truly be honest. ButÂ Megan has been going through some serious PTSD after the abuse Terence put her through. Abuse that Kyle not only condoned, but sent her back to when she escaped. When she finally tracks down Lisbeth, it’s clear that she was put through something similar.

Megan can’t go back, she just has to be smarter than everyone else. It doesn’t even matter that Kyle takes her side, and blows everyone one away by telling them he will only direct, not star in, the movie. Megan is genuinely pleased at this turn of events. And it changes nothing.

This is the art of acting. Walking the fine line of an honest portrayal means connecting with the role as honestly as possible. The lines are scripted, but the soul is there. This is why Megan has what it takes to fool everyone associated with IHM. She plays what they want her to be, what they expect her to be, while still maintaining threads of who she was. She can do this, but Leslie can’t. Therefore, Leslie has to go. She is not apart of the long game. (That being said, a special shout-out to Autumn Reeser, whose strong points in this hour were so incredibly on point!)

Grab your stress balls, put your game face on, and hold on tight for the twists and turns Season 2 is sure to provide.

Season 2 of The Arrangement returns with a meticulously crafted opening hour, and an answer to the big question of whether or not Megan can go through with last season’s daring promise.

10 Things You Didn’t Know about Pokeprincxss