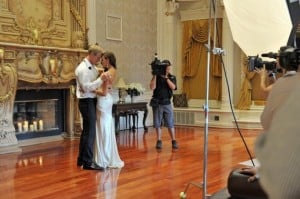 Last night on The Bachelor, Sean headed out on the first of many dates to come this season and, while there was a small amount of drama, overall I’d say they went pretty well.

The first one on one date of the season went to Sarah, who felt flattered over being chosen first, however, I kind of felt like it was Sean’s way of figuring out early on if he could deal with the fact that she only has one arm. Either way, it didn’t matter because the date went great with the duo free falling over three hundred feet off the side of the building for fun before having a champagne toast. Way to show her you aren’t going to treat her gently, Sean. After their dare devil antics, they had a nice dinner in which the conversation seemed to flow pretty easily. In the end, Sean gave Sarah the date, making her safe for yet another week.

The second date of the evening was the group date in which thirteen of the ladies were taken to a photo shoot for Harlequin romance novel covers. Kristy, a model, felt confident that she had this one in the bag, and in a way, she did because she took home the prize of a three cover photo shoot deal with Harlequin. The prize she didn’t manage to snag, however, was the rose, as Sean held out until the post-shoot pool party to hand that out.

At the pool party, Sean had one on one time with most all of the women, but only a few seemed to have any real chemistry. Lesley, who also had an excellent photo shoot with Sean, had a sweet, but awkward interaction with him and had to actually go back a second time to get the nerve to give him a kiss. Kacie, the returning bachelorette, finally had the chance to chat with Sean and they had what seemed to be a great chemistry. Of course, she has an edge, having been friends with him prior to the show. Katie, the yoga instructor with hair like Marie Antoinette decided that the show wasn’t for her and was escorted to the limo by a seemingly indifferent Sean. A very pout Tierra managed to convince Sean that her less than stellar attitude was simply because she really wanted to focus on her connection with him. At the end of the group date, Sean handed out the rose to an ecstatic Kacie, much to the dismay of all the rest of the girls.

Sean’s third date of the night was with Desiree, the bridal stylist from Colorado. For their big night, he decided to take her to an art gallery and test out her sense of humor by rigging it so that it looked like she knocked over a million dollar piece of art work. In the end, Sean couldn’t hold out long and let her in on the joke, to which she paid him back later by acting as if she wasn’t sure she would accept his rose.

At the rose ceremony, the women who did not have an opportunity to go on a date this week all fought to make certain Sean remembered them. Amanda, the Fit model from California, scowled and pouted on the couch making the rest of the ladies uncomfortable most of the night until, of course, Sean pulled her aside and her attitude finally became delightful. In the end, there were no big surprises with Sean sending home Brooke and Diana, two girls that had never really made it onto the radar.

What did you think of Sean’s choices last night?

The Bachelor airs Mondays at 8/7 on ABC.