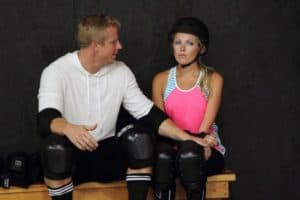 Last night on The Bachelor, a little bit of the shimmer that was all six pack abs and blonde hair blue eyes started to wear off when Sean started to show some of his first real case of The Bachelor blinders when it came to the ladies.

Sean’s first date of the week was an individual one with Selma, whom I swear looks just like a brunette Kandi from Two and a Half Men (April Bowlby), which may explain the same pitfall that Sean falls into when it comes to this beauty. While she seems blatantly a bit of a girly girl who likes money and fancy things, Sean continues to convince himself that just because she climbed a mountain their date, that she must have a secret adventurer inside of her dying to get out. Reality check, Sean. She climbed the mountain to impress you, but don’t plan on grabbing your hiking boots with this one as a weekend tradition. After their rock climbing expedition, Sean continued his “test” to see if Selma could handle roughing it with dinner in a quaint little area set up with themed motor homes in lieu of a fancy restaurant. Despite some major eyes and cuddles that Selma gave Sean all throughout their dinner, when he moved in for the big kiss, she explained that her Muslim heritage would not allow her to kiss him on camera until she was the only one left.

The second date of the week was a group date in which the women were taken to a roller derby rink in order to train for a competition amongst themselves. The majority of the ladies were shaky on skates with some not being able to skate at all. Sarah lamented as to whether or not she even felt comfortable participating due to her disability (remember that she only has one arm), a fact that I thought should have been addressed to this poor girl before the date even began. Amanda seemed to get the hang of it all real quick, racing around the rink and trying to intimidate the other girls. She soon learned, however, that karma is, indeed, when she fell flat on her face, sending her to the hospital with a possible broken jaw. After Amanda’s accident, Sean suggested they just have a good old fashioned “free skate,” which they did, complete with cheesy 80’s music.

After the roller skating, the date wasn’t over and the group headed off to enjoy some cocktails and alone time with Sean. While the ladies sat around making small talk and pretending they were fine sharing one man, Amanda showed back up with a clean bill of health, aside from a sore jaw. Tierra, who had blatantly been stewing and gearing up for some drama throughout the entire date, waited for Sean to head off with one of the girls he had a clear connection with before declaring she wanted to leave. After hunting Sean down, she confronted him and began her sob story about the fakeness in the house and how she hates drama (Hello?…Pot?..Kettle?…). Sean, who had obviously put on his Bachelor blinders for the evening, bought it hook, line, and sinker and even went so far as to give her the rose to “make” her stay. If the fact that all the women in the house do not get along with this girl isn’t enough to convince you Sean, haven’t countless movie villains shown you that anyone who can raise one eyebrow that high independently of the other is obviously up to no good?

For Sean’s third and final date of the week, he, thankfully, chose Leslie H., saving the viewers from having to watch her cry anymore over her need to let him see the real her. In a “Pretty Woman” style date, Sean took Lesley shopping, where she was dressed from head to toe in elegant clothes, shoes, and jewelry, even going so far to complete the illusion by offering up a 120-carat necklace for her to wear. At dinner, the conversation was friendly enough, but although Lesley seemed completely engaged, Sean’s eyes glazed over about five minutes in, leaving him to put an abrupt end to the evening and send her packing with the explanation that he just couldn’t make the romantic connection.

With Leslie H. already sent home for the week, that left only one other lady to be sent home at the rose ceremony. After a few conversations and a fake apology from Tierra to a couple of the girls, the ladies lined up to find out who would be given the boot and sent home. Â Despite having risked a broken jaw in the name of love, Amanda was sent home, which, although it seemed awfully heartless considering her date, was a good decision.

What did you think of Sean’s decisions? Do you think he’ll ever see through Tierra’s plans? Share your thoughts below.

Don’t miss next week’s double episode of The Bachelor on Monday at 8/7c and on Tuesday at 8/7 on ABC.