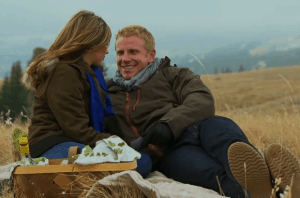 Last night The Bachelor kicked off part one of its special two night extravaganza with Chris Harrison’s announcement that they would be going on a worldwide tour to find love, which I’m sure had all the women’s heads dancing with visions of theÂ EiffelÂ Tower, exotic beaches, and…Montana? Yes, that was the first stop on this whirlwind of a journey.

The first one-on-one date of the week was given to Lindsay, the girl who showed up on night one in a wedding dress. Although Sean admitted that this prank almost had him heading for the hills, he seemed to have gotten over his concerns as they soared over Glacier National Park in a helicopter and shared a romantic picnic at the Blackfeet Indian Reservation. Â After a bit of conversation, Sean, who apparently doubles as a psychologist, analyzed her need to settle down as a result of her “army brat” upbringing. In between therapy sessions and some serious making out, Sean gave Lindsay the rose.

Once the group date card was delivered, the women knew by process of elimination that Tierra and Jackie would be going on the dreaded two-on-one date. While the two stayed home to consider the hand they’d been dealt (Jackie looking nervous and Tierra laughing manically), the rest of the ladies headed off for their big date.Â  Once they arrived, they were told that they would be dividing into two teams and competing in a Montana-style relay race with the winning team earning the right to stick around and continue the date with Sean. At some point these girls have got to be wondering why Sean likes to pit them against each other so often on these dates, yet claims to hate the drama.

The events for the race included canoeing, carrying bales of hay, sawing a giant log, and milking a goat, which one of the bachelorettes had to then drink. After a rough start, the red team, which consisted of Selma, Dez, Robyn, Lesley, and Sarah, took the win with poor Dez being the one who had to chug the goat’s milk. After sending a very pouty blue team home, Sean felt bad and decided to invite them back to the party later on during the date, a move that infuriated the red team.Â  Having heard that the blue team, or “losers,” as Tierra called them, had been invited back to the party, she decided to make her own secret visit to the date to see Sean in order to get a leg up on Jackie for the two-on-one date the next day.

For the two-on-one date, the trio rode horses up to where they would be dining. Jackie, during her alone time with Sean tried to clue him in to Tierra’s bad behavior, but it didn’t come across clearly enough to penetrate the haze that seems to be around Sean’s head when it comes to that girl. Sensing that Jackie may have tried to talk a little smack about her, Tierra used her alone time with Sean to “open up” about the death of her boyfriend who had been in and out of rehab. Again, using his powers of psychotherapy, Sean declared an understanding for Tierra and why she is so afraid of losing people. When the two returned to the table to rejoin Jackie, it was clear that the damage by Tierra had been done and within moments, Sean had Jackie folding her napkin and heading home.

At the rose ceremony, Robyn and Lesley decided they had had enough of Tierra’s antics and they confronted her, allowing her to, again, play the victim who is being attacked by the other women. Sean, who at one moment says the ladies should focus on their relationship with him rather than talk about Tierra and at the other voices his frustration over them not being open with him about the conflict, seemed somewhat pouty himself and began to come across as a bit condescending. In a very predictable move, Sean sent home the woman who stood up to Tierra at the rose ceremony, Robyn.

Tonight on The Bachelor, the dates and drama continue and, by the looks of the super-hyped injury that they touted all during last night’s episode, the show may soon have to rename itself to the Tierra Show.

The Bachelor airs on a special night tonight at 8/7c on ABC.