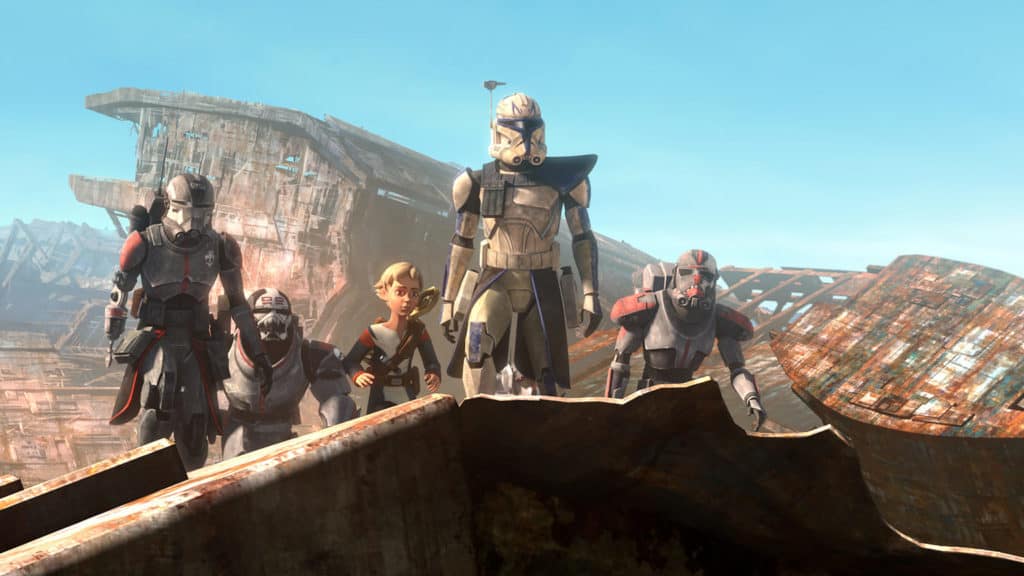 Well, the moment finally happened, and what people thought was coming finally happened. But before getting to that it’s important to realize that the clones, Hunter, Wrecker, Echo, Tech, and Omega, are still working for Cid in order to make a bit of money. The hard part is realizing that she’s charging them for everything, which is fair enough it would appear, but not conducive to lining their pockets with credits. This time around it would appear that they had to procure a lizard-like creature that the locals of its native planet weren’t too keen on letting go. But as can be imagined, the troopers were able to complete the mission and return to Cid where they learned the hard truth of what it’s like to earn so little for so much. But between fuel costs, food, and other expenses, such as the traditional snack that Omega and Wrecker put on Cid’s tab, the clones are left with very little as profit. Cid isn’t shy when it comes to reminding them how much they rely on her at the moment, but at the very least she’s willing to keep them busy for the time being.

When a stranger comes calling though it’s a genuine surprise for everyone, even if Cid responds in her usual, sullen manner. The stranger that reveals himself is none other than a fan favorite, Captain Rex, the same that served with Anakin Skywalker and then Ahsoka Tano, who’s come looking for the group after hearing about them from Rafa and Trace Martez. Rex is one of the many characters that a lot of people thought would permanently taken out as his inhibitor chip demanded that he turn on the Jedi like everyone else. But unlike many of the troopers he struggled against completing Order 66, and apparently had help in removing his chip when all was said and done.

Most fans have been paying close attention to Wrecker and his continual headaches, especially after a previous episode that featured Fennec Shand, when Wrecker was heard to say something about being a good soldier. While the chip in Wrecker’s head might not have worked initially, there was no doubt that it was starting to fire as the group attempted to scan it and remove it. The fact that he suddenly attacked them made it clear that his headaches had been caused by the chip attempting to override his better sense. The downside of this is that Wrecker isn’t just a big, strong clone, he’s also a pretty decent fighter, which meant that the others were in for a heated battle the moment he turned on them. Unlike Crosshair though, Wrecker isn’t a distance fighter, meaning his scary mug was going to get up close and personal with the lot of them. Thankfully he was stunned before he could harm Omega, but imagine a big, scarred-up brute like Wrecker being controlled by a mandate like Order 66. That’s nightmare fuel right there.

One also has to take into account that there was an apparent addition to the order, that any clone not following the order was to be disposed of. This might have been something that was already covered in the past, but it’s still interesting to review. The fact is that Wrecker took all four of his companions out, as well as Captain Rex, which is hard to believe, but reasonable all the same since he’s a big guy that’s been bred for fighting and when he’s focused he can be extremely dangerous. The fact that he’s afraid of heights definitely humanizes Wrecker, but it doesn’t make him any less dangerous. One could say that he took his squad by surprise, that if they were ready to fight that he might not have waded through them so easily, but the fact is that he still ran through them pretty quick, even if Tech and Radar aren’t much for hand to hand combat and Omega couldn’t really fight if she needed to. But taking on Hunter and Rex was fairly impressive.

With their chips removed at this point it’s a hope that this is one hurdle the group doesn’t have to face any longer, but there are bound to be plenty more since the overseers of the scrap yard that Rex led them to in order to remove their chips managed to spot them before episode ended. It’s likely that they’ll either open the next episode with another fight on their hands or with someone else in close pursuit. It’s a hard life for the clones, and one that’s not getting any easier as they continue to sift and sort their way through the galaxy trying to stay clear of the Empire while they make a few credits and discover what life is like outside of the Republic. So far, the show has been a lot of fun.