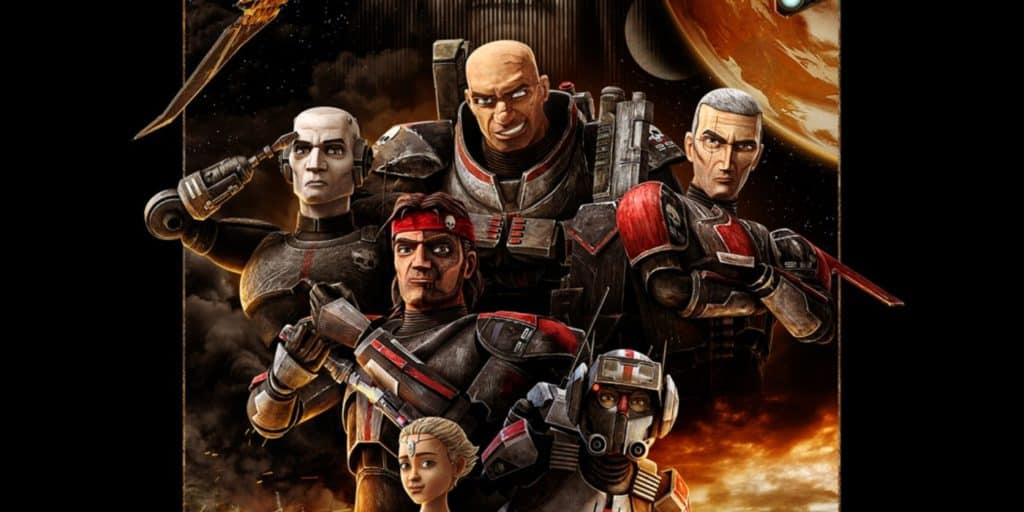 Hunter, Wrecker, Tech, Crosshair, and Echo make up a very different and extremely effective unit known as Clone Force 99, also known as The Bad Batch to the fans and possibly to the Kaminoans that created them. The group of clones was actually named for a malformed maintenance clone that helped to defend the cloning facility from Separatist forces during the Clone Wars, and possess superior skills that put them well ahead of the other clones. One drawback is that they’re not that great at taking orders since the command chips in their heads didn’t work when Order 66 came around, enabling them to ignore the order. Crosshair, the most vicious of the bunch, was actually the only one to accept the order but was stopped from killing a Jedi padawan by Hunter, who had no idea what was going on but refused to believe that the Jedi were as bad as they were made out to be. This group of clones worked with Cody, the same clone that worked with Obi-Wan Kenobi, and had great respect for the Jedi, but were also known for having a reputation that made them answerable to no one. Obviously this wasn’t something that was normal in a clone, let alone several of them. But despite the fact that there were clones that fought the compulsion of Order 66 and even went into hiding not long after the end of the war, Clone Force 99 continued onward without really knowing what had happened. The story starts out as one might expect, with a Jedi and her padawan hunkered down against an oncoming droid army that threatens to overtake their position. As the padawan returns to the group, however, his smile tells the others that help is coming, though it’s not quite the help they expect.

This is made evident when Clone Force 99 begins their initial attack by rolling a boulder into several of the battle droids, scattering their formation and opening a giant hole in their forces that the clones quickly exploit as they display their unique skills when it comes to dismantling the droid forces, even going so far as to link three tanks together before shoving them off a cliff, thanks to Wrecker’s immense strength. Following the battle, it’s pretty clear that these clones aren’t the standard issue since they don’t look like the other clones and their armor is definitely unique in design and ornamentation, though it’s been seen throughout the Clone Wars series that several clones take the time to differentiate themselves from the others in various ways. From battle scars to the adornments that are seen on helmets and armor, some clones have made a show of being unique, while others have followed regulations and made it clear that their programming trumps everything. This is why when Order 66 is given it’s hard to think of why Crosshair is so doggedly attached to his programming when his fellow clones are not. The sniper of the group attempts to shoot down the padawan that was seeking to assist Clone Force 99, only to be stopped by Hunter, who isn’t bound by the programming.

So far the first episode, which will be the longest as far as it would appear, establishes that the story begins with the ending of the war and the uncertain future of the clone forces. When the Kaminoan cloning facility is visited by none other than Grand Moff Tarkin, it’s very clear that he has little but disdain for anything that does not follow his carefully placed sense of order. Upon gauging Clone Force 99’s skills and tactics he sends them to seek out and destroy a group of insurgents, naming them as Separatists. When the clones find the insurgents and realize that they’re women, men, and children, not to mention Republic soldiers, seeking to flee the new Empire, they meet none other than Saw Gerrera, who apprises them of the situation and makes it clear that they’re no longer fighting for the same just cause. Through it all, Crosshair is the only real skeptic, demanding that orders be followed. When it’s made known that Tarkin has been keeping tabs on the bunch via probe droid, the group makes their way back to Kamino to rescue a young girl by the name of Omega that tried to warn them that things weren’t right. As of now, it’s a great deal of confusion with only a couple of constants, that Clone Force 99 and Omega, who they save from the Kaminoan facility, are considered the enemy, while Crosshair, who has been conditioned to maintain his orders, even if means betraying his fellow clones.

So far the series is looking as though it’s going to be something that might not rival Rebels or the Clone Wars but will tell a great story all the same. Plus, with 16 total episodes in this first season, it’s likely that it will cover a great deal of ground.