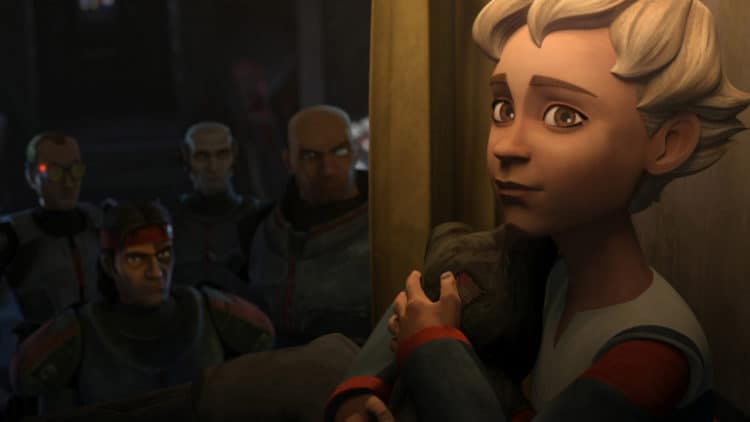 It feels like a slightly slower progression than some folks might want to see as the Bad Batch moves along, even though the previous episode was over and done with so quickly that many audience members might have felt that the episode had just started. But in this episode, Hunter and his band of misfits quickly realize that their ship took on a little too much damage as they find themselves being kicked out of hyperspace and forced to land on a planet to complete repairs. The downside is that they not only had just one part left for repairs, but there was a creature known as an Ordo Moon Dragon hanging around the ship that stole the spare part and took off with it down a tunnel system that was just barely big enough for Omega to maneuver around in. Eventually it was up to Omega to retrieve the part, and the moment she did, as one might expect, the dragon happened to appear and it looked as though that might be it for Omega. One thing that can be said about each of the clones though is that they’re usually quite resourceful and more than a little capable. This was discovered when, after remembering that Tech said the dragon was drawn to energy sources, she tossed her flashlight out of the path she needed to travel while grabbing the spare part and making her way back to the surface. It was here that Hunter, who had been incapacitated after a brief run-in with the dragon, had come back to consciousness and realized that Omega was gone. When she reappeared, with the part no less, it could be deduced that Hunter was able to realize that Omega wasn’t just a tagalong and that she had a lot to offer to the group.

One worrying observation that fans might hope is nothing was the fact that Wrecker was holding his head as though it was bothering him, which is ominous simply because of the chip in the clone’s head that every clone has, the same chip that made Order 66 possible. There are no Jedi about, but it’s still a concern. It could be that he struck his head a few times when tidying up the compartment to the rear of the ship for Omega, who was highly appreciative of having her own space. But it’s still something to watch since the mention of the chips was made in the episode and it’s fair to think that this will be something that will continue to be a problem that needs solving. As of to make that point any clearer, Crosshair, the only one among Clone Force 99 to follow his programming, remains at Kamino under the observation of Tarkin, and now, Vice Admiral Rampart, whose idea of installing human stormtroopers to bolster the ranks of the clones has met with success, and some failure. Upon being sent to Onderon with Crosshair as their commander, the new, specialized troops are tasked with finding Saw Gerrera and eliminating the threat he poses. When Crosshair orders the troopers to kill everyone, including the civilians, one of the troopers balks and goes against orders. After promptly shooting the man that wouldn’t follow his orders, Crosshair makes certain that nothing and no one is left before heading off. It’s clear that Crosshair still misses his group, but he’s a soldier first and as of now will always put the Empire’s interests first.

So far The Bad Batch hasn’t disappointed, but it feels as though there’s a lot more to come and a lot more to be revealed about the clones and their place in the Empire, as the Kaminoans are starting to feel the pressure as the Empire has begun to determine that the clone army might not be as cost-effective. It’s horrible to think of human beings in this way, but since Attack of the Clones, it’s been obvious that the clones of Jango Fett haven’t really been given as much regard by everyone as they’ve been treated as expendable assets that can be replaced so long as they have tissue samples from Fett that are able to be used. But it does sound as though things are starting to wind down since thanks to the death of Jango Fett, there’s no telling what the cloners will be able to do, but it does sound as though they might have a contingency that might need to be put into play. The way that things are progressing it does feel as though Kamino is going to become less and less of a resource since the Empire has, in the past, displayed a great deal of xenophobia and could be leaning in that direction now. Each episode is telling us a little more and also making it hard to wait for the week to come.