Home
Comics
The Best-Selling Comics in America Are All Japanese 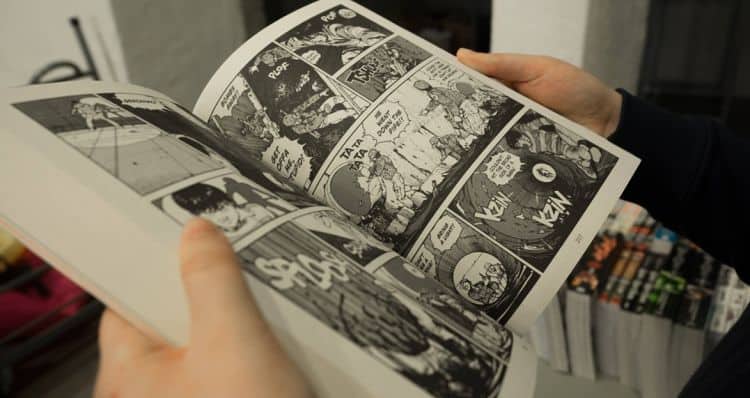 There is a revolution quietly taking place in America, and I don’t mean the right’s insistence on libeling the left as Communists and the left’s insistence on libeling the right as Nazis. No, this revolution can be found among the readers of graphic novels, comics, and other geeky media. Where once readership of manga was limited to only a few, it is now becoming mainstream, and all while sales of the traditional American superhero comics drop precipitously.

The Demon Slayer manga is busy raking in the cash, with over 26 million copies being sold in the first half of 2021 alone. Written by the reclusive Koyoharu Gotoge, the manga has been adapted into an anime series and an anime movie. But whether in print, serialization or cinema, its popularity always impresses. The movie made the equivalent of over 368 million US dollars in the Japanese box office, becoming not only the most successful anime movie there but the most successful movie altogether, beating out even its live-action competitors. It went on to become the highest-grossing foreign language film of all time upon its US release. When you factor in worldwide sales, this grows even more impressive. And all that despite having been given an R-rating in North America.

It is perhaps noteworthy that Koyoharu Gotoge had only just turned thirty when they penned the final issue of Demon Slayer, marking the end of a passion project that has enthused millions. Gege Akutami, the writer of Jujutsu Kaisen, is even younger. These young and hungry authors usually produce Intellectual Properties of their own making rather than continuing the stories of more established characters, in contrast to what has become the norm in American comics lately. Though that was not always so, of course. Simply look at the phenomenal number of original characters and stories that Stan Lee produced over his legendary career.

It is particularly interesting to note that some of the most popular manga being released today have a somewhat western flavor to them. Attack on Titan is set in a fantasy world, but one whose populace use European naming conventions, wear western clothes and live in places with a western architectural style. My Hero Academia is very much Japanese, but the influence of famed American comic series the X-Men upon the manga is hard to miss. Yet said manga massively outsells Marvel’s current issues of X-Men. Why is this?

One manga, Demon Slayer, outsold the entirety of Marvel and DCs huge stable of comics in 2020. That should never be the case even at the best of times, but especially not when superhero movies are dominating the global box office. Sales of the comics would be expected to skyrocket in tandem with sales of the cinema tickets, but that has not been the case. It is hard to look on that situation and not see it as a failure on the parts of those who are running Marvel and DC these days. Popularity comes in phases, it spikes and it plummets. Just ask the Western genre, or the swords and sandals epics of old. This current craze for comics is unlikely to last forever. For the people in charge of the big two to so completely fail to capitalize on this unprecedented surge in popularity and name-recognition is almost criminal.

Even so, it is easy to understand why the popularity of the movies has not translated into a popularity of comics. The movies are based primarily on stories and characters made during Marvel and DC’s heyday. The comics being produced in more recent times are a far cry from those in terms of story quality or attention to continuity.

Take the conflict between the X-Men and the Inhumans that dominated those franchises over at Marvel a few years back for example. In that storyline, which was stretched out over more than a year of publication, the world was beset with a cloud formed of the Terrigen Mists, the substance that turns people into Inhumans yet kills any mutants it touches. The X-Men wanted rid of it, the Inhumans wanted to protect it. Simple enough. The editors at Marvel thought it a grand idea. Storm was leader of the X-Men at the time…..

Those with a passing familiarity with the X-Men might recall that Storm has the power to control the weather. And recalling her might find it a bit less surprising that readers were unwilling to buy a year’s worth of monthly comics in which the X-Men struggled to defeat a cloud. One can’t help but think that such a conflict would have lasted only a page or so back when Jim Shooter was running the shop or Chris Claremont was writing the stories. Perhaps the editors at Marvel should do more editing, and let the writers write. Or perhaps the people who own Marvel should hire some people who can craft a decent story instead of letting the golden opportunity they have found themselves with go to waste. This spike in popularity for superheroes will not last forever, after all.

If Marvel and DC fail to capitalize on it, future generations may look back on them and laugh. And they’ll probably be calling them baka while they do!