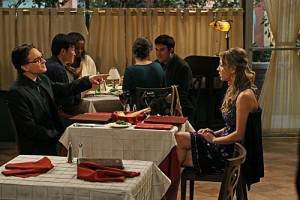 To reach the 100th episode is a huge milestone for any television series. Some celebrate it with flashy stunts such as using lots of guest stars, having a big shocking moment like a death or surprise wedding, and some shows even flip the script entirely on what you think you might know about the plot. Obviously, The Big Bang Theory didn’t off one of their characters last night, but what they did do was celebrate by using a classic television trope: the what-if scenario.

Having a what-if episode has become pretty popular lately as the airwaves prep for the Grey’s Anatomy what-if episode, and Community‘s best episode of the year was a series of what-if scenarios all based on who performed one simple act. In this instance, the series decides to put its flagship on again/off again characters back together as Leonard rekindles his relationship with Penny. It all seemed so sudden and spontaneous on Leonard’s behalf to do it, but it led to an interesting scenario with the two characters.

One of the fundamental elements of their relationship was how Leonard always (remember that’s the bad word for describing things) over-thought things and how Penny has never really been out for a complex emotional relationship. So in this instance they realized that if they were to reunite it would all be centered on post-fight sex at odd hours in the morning that would then have to be hilariously explained away to Sheldon whenever Leonard got caught. Even after the whole scenario played out and the show put us back into the present reality, Leonard still chose to take this path and ask Penny out again. She accepted and we’re left to wonder if the show is truly serious about putting these two back together considering the less than favorable version of a relationship we were shown after their first reunion date.

The other main bit of fun involved Sheldon’s displeasure at being sent the wrong Spock standee. It’s funny how a show like The Big Bang Theory can get a lot of good comedy out of something as simple as that very sitcom-y situation. Instead of the classic Leonard Nimoy Spock, Sheldon receives the Zachary Quinto Spock from the newer JJ Abrams film. It’s one of those great ‘˜it’s funnier than the on-screen joke itself’moments, as every time Parsons gets to slag off Quinto it’s a good-natured nudge toward the actor who wound up playing a role that at the time several fan sites suggested Parsons himself was perfect for. Nice one, show. 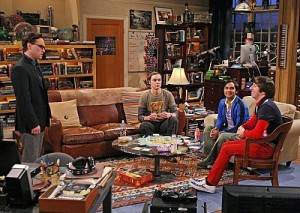 This show has come a long way from being ‘˜that show about the group of non-social nerds and the hot chick that lives across the hall.’The Big Bang Theory is a successful mix of solid characters and an ability to breathe and thrive off of the pop culture that these characters and the fans of the series itself embrace whole-heartedly. The show also has a real lack of fear toward changing their group dynamics, and they’ll even add new characters to the mix which will allow The Big Bang Theory to continue to live long and prosper all the way to their next big milestone.

“Oh, 8:30.. did you and Penny decide to go out and paint the town beige?”–Howard to Leonard upon his early return home from his date with Penny.

“Needy baby, greedy baby indeed.”–Sheldon referring to the title of one of Leonard’s mother’s books.

“Why would I feel safer with Zachary Quinto at the foot of my bed?” “I dunno, he was pretty bad-ass on Heroes.” “You’re right I’ll give him a shot.”– Sheldon and Leonard discussing the benefits of having the Spock standee of Quinto’s version of the character.