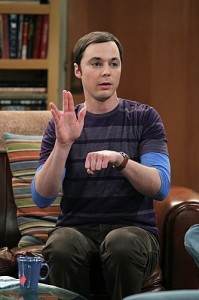 After having shared an office with Raj for quite some time, Sheldon jumps at the chance to get one of his own on this week’s episode. Unfortunately, he’ll have to fend off the shared interest in the vacant office from his nemesis Kripke. While Penny has her own problem in the form of a ghastly unwanted gift from Amy that tests the resolve of their friendship.

First off, I just have to sincerely thank the writers for giving us a chance to view how non-athletic outside of paintball Sheldon really is. Watching Sheldon and Kripke battle it out on the basketball court was one of the best moments this season. Every single earnest attempt at scoring a basket was underscored by the fact that both men are incredibly uncoordinated when it comes to this particular skill. Leonard may have gotten tired of watching them try for forty-five minutes straight with no results, but I could have watched those two for much longer. The final contest had Sheldon winning the new office much to his delight of course–nothing makes Sheldon happier than ultimately getting his way. I also need to make special mention of when Jim Parsons had to explain the rules of Rock, Paper, Scissors, Lizard, Spock (the first proposed way to settle the battle for the office), to Kripke–bet he never thought he’d have to go through that again at least not twice in a row.

When he starts to enjoy his new solo space, Sheldon quickly realizes that these spoils are in fact just spoiled by a number of issues such as the thermostat being in the office next door, a mysterious hole in the wall, and an appearance by another of Sheldon’s lifelong nemeses, a bird outside his window. That plus the fact that the recently retired Professor Rothman still shows up and without any clothes on have made Sheldon’s new space a personal living hell. Certainly one of those careful what you wish for scenarios for Sheldon but he was still using it by the end of the episode. It remains to be seen if he’ll stay there or move back in with Raj again once someone helps him get his head out of that hole in the wall he just had to personally investigate all in the name of scientific exploration. I would have done the same thing as Leonard when he snapped a picture and appeared to be preparing to tweet it while Sheldon remained stuck. 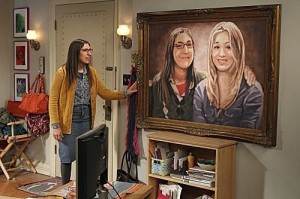 Outside of the university, Amy shows up at Penny’s apartment with a rather large gift in her hands. It’s a less than flattering painted portrait of the two of them and all the jokes made throughout the episode about how Penny looks in it are spot on–it’s really bad. I think we’ve all been there with a friend, especially a newer friend who may be a little more sensitive to receiving the truth about the feelings toward a gift. Penny does her best to keep from hurting Amy about it, but eventually she’s caught red-handed when Amy sees that she took it off the wall.

Penny goes over to Amy’s place to apologize and to insist she wants the painting back. She doesn’t, however, ever tell her that it’s not really something she wants on her wall because that’s what you do when you want to keep a friendship intact. I loved that Penny ultimately passed the buck to it being about Bernadette when she claimed to Amy that she was hurt by not being in it as well. The story ended with the duo sharing what could probably be their most creepy interaction yet, but hey at least they’re still friends. Her girl crush on Penny seems to cross so many lines, but it’s all in the name of comedy and it certainly provides that. Even if the viewer likely can’t get the mental image of that painting’s origins as a nude portrait out of their heads.