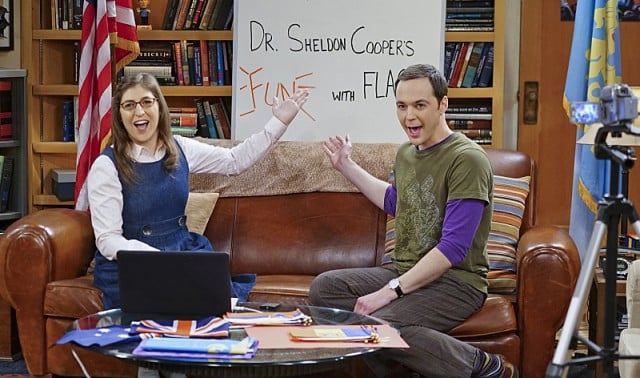 Hello everyone, and welcome to Dr. Sheldon Cooper and Dr. Amy Farrah Fowler present: Dr. Sheldon Cooper’s Fun with Flags. I’m only kidding, but don’t you wish that was really a show you could call in to? Sounds like fun to me. This episode had lots of ups and downs for our characters, and set up some what are sure to be lengthy emotional journeys for several characters. The Big Bang TheoryÂ has been killing it with the emotional arcs lately, so I’m extremely optimistic that they will continue to do so.

This week onÂ The Big Bang Theory:Â Raj makes up his mind about how he feels about Emily, with some prodding from the guys. Leonard and Penny obsess over the fact that they’re getting old, and vow to find something “young and fun” to do on Valentine’s day. Howard and Bernadette find a surprise guest in their new hot tub, and Bernadette drops a bombshell. Amy and Sheldon host a live edition of “Fun With Flags”, but they have some unwelcome guest callers.

I thought thatÂ Big Bang TheoryÂ has handled relationship stories remarkably well. Sheldon’s break-up especially, but even the slow burn relationship between Leonard and Penny has become a staple of modern television relationships. Â They’re finally dealing with the fact that Raj’s feelings for Emily didn’t run as deep as they should’ve, and they’re also realizing that they didn’t want all of their main characters in relationships or married off.

The Raj breakup story was good, but not great. It really wasn’t explored enough, and he spend most of the episode whining on Fun with Flags. While I’m glad that there is a single character again, they didn’t spend enough time on him to warrant the emotions that they tried.

Other than the Raj story, it felt like a pretty balanced, humorous episode. Howard and Bernadette reach a natural progression in their lives. Sheldon and Amy used Sheldon’s quirkiness as a conductor for the rest of the story. Leonard and Penny deal with getting older. They’re all realistic (ish) problems, and they’re explored with a good amount of interest and humor. Mostly, humor comes from those real moments.

Were you satisfied with the bombshell thatÂ Big BangÂ teased? I thought it might have been predictable, but the good news is that (spoiler) Bernadette is pregnant! There are lots of new possibilities that it opens up for the show, and they’ve really been nailing the emotional stuff lately.

As always, here are some of my favorite quotes/moments from the episode:Â

Ultimately this was a solid, balanced, funny episode ofÂ Big Bang.Â I didn’t care for everything in it, but you’re not going to like every episode of a show. Overall, I’m still very impressed.

What did you guys think? Did you enjoy this episode? Let us know!