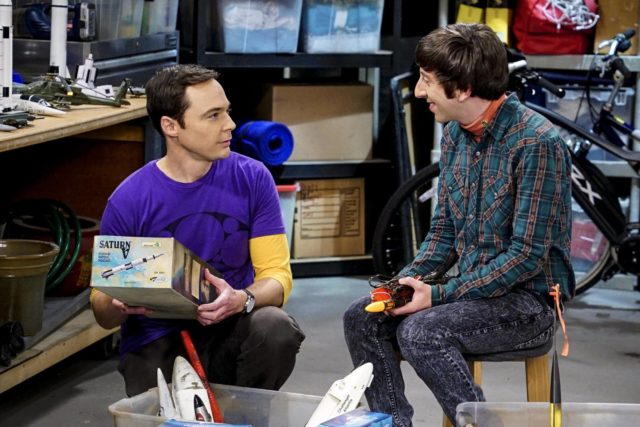 Surprise, surprise! Howard and Bernadette are having…anxiety about baby number two. Boy or girl, there is a 100% chance that baby will grow up to conduct science experiments in the backyard. Sheldon of all people points this out to his friends, though looking back on Sheldon’s childhood history with home experiments, adult supervision is necessary. Every child wants to make their parents proud, and every parent wants to do right by their child. The Big Bang Theory tackles both ends of the parent-child dynamic this week.

Howard and Bernadette weren’t picky about their baby’s gender the first time around, but when they find out that their second is a boy, they are both apprehensive. Raj is Bernadette’s living proof that gender doesn’t dictate the type of person you are going to be, or the relationship you will have with your siblings. Anyways, it may be up to Penny to teach Howard and Bernadette’s little boy how to be a man when it comes to anything having to do with sports. Science is cool when you know what projects to do. Who better for this task than an engineer? Looking through his collection of rockets brings up a lot of father-son issues for Howard. He’s never had the chance to confront his dad for abandoning him, which is why Howard has kept a few select items of his. His father’s model rocket, much like their relationship, explodes. What finally gives Howard the confidence in his abilities is teaching Sheldon to drive. Howard is patient, encouraging, and like any good father, can’t keep the kid from getting his first speeding ticket.

On the other end of the spectrum, Leonard once again feels like an inadequate son. Beverly Hoffstader makes her weekly required check-in with her son, but when she gets Penny instead, strange things start to happen. Most men would like their wives to get along with their mothers. Leonard is not one of those men. The only person who has a bigger problem with this friendship is Amy. The one thing Beverly is proud of is Leonard’s choice in spouse. That is a big deal. It means that in some way, Leonard’s mom trusts his judgement. She strongly disapproves of his tears, but that’s a whole other argument.

The Big Bang Theory family is about to expand. How will everyone be changed by a new addition?

Howard marks a milestone in Sheldon’s life on this week’s episode of The Big Bang Theory.