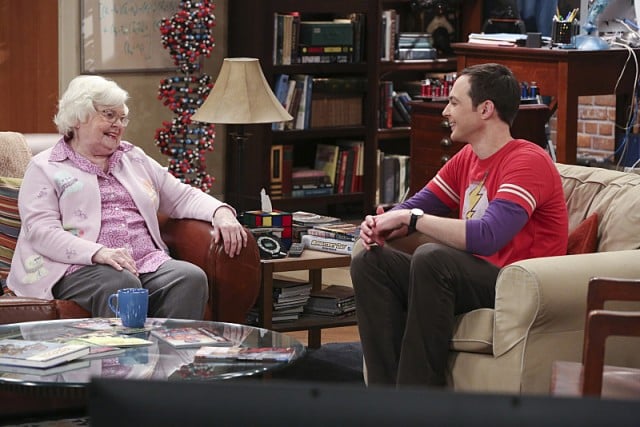 After a few week hiatus,Â The Big Bang TheoryÂ has finally returned to grace our television screens once more. Not only that, but they’ve returned with the introduction of the fabled but long un-seen “MeeMaw”, Sheldon’s dear grandmother and favorite family member. Sheldon was sure that she’d get along with Amy, but those things seldom go as planned.

This week onÂ The Big Bang Theory:Â Sheldon’s MeeMaw (June Squibb) arrives for a visit. Sheldon is beside himself with excitement, but things do not go as planned when she meets Amy for the first time. Raj and Howard meet a woman at the comic book store who flirts with Raj. When she asks Raj for help with her screen-play, he’s conflicted because he has a girlfriend.

This was a good episode. I don’t think it was a great episode, but it was a good episode. I think there was more good than bad, so I’ll start with the negative: MeeMaw didn’t land for me. June Squibb was wonderful, and she hit all the right beats, but she was trying to create an effect on Sheldon that didn’t really work. The conflict that was supposed to be clearer was between the two most important women in Sheldon’s life, but it fell flat and didn’t dedicate enough time. As much as Raj makes me laugh, his plot took up too much time, and could’ve been used in a different episode.

All of the smaller bits of the episode worked really well. Raj isn’t sure that Emily is right for him, so it manifested in his flirtation with another girl, and one who shares his interests at that! With a television twist, that story felt extremely human and heartfelt. It really explores the gray area of being committed to someone, but having your feelings and emotional side challenged.

As much as I didn’t care for MeeMaw and Amy’s shortened “conflict”, there were still some really strong beats in that plot. Leonard and Penny have this really great groove that they’re in, since they’re not the center of dramatic attention anymore (finally!!), they can play more of a straight man role. What’s interesting about it to me is that they’re like a straight man, but they’re a couple.Â Big BangÂ is always innovating!

This was a strong episode with a lot of great, funny moments. When it comes down to it, though, it failed to deliver on the strongest emotional beat. But of course, don’t fret, the show is still wonderful, hilarious Thursday night fun!

What did you guys think? Did you enjoy the episode, or did it fall flat? Let us know in the comments!