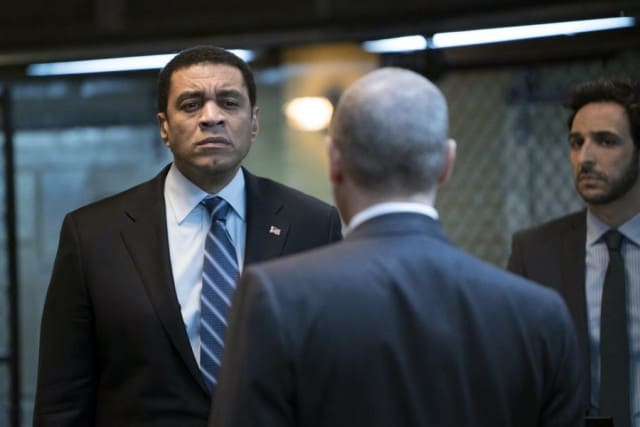 Welcome to my first ever live recap of a television show. One of the best shows on TV today, and one of my favorites:Â The BlacklistÂ is one of the best crime dramas on today’s widening TV landscape. Please stay tuned for my live reactions and let us know how you enjoy the show. I will try not to overshare everything, just my reactions.

Here we go! Opening with a birthday clown! Who is immediately kidnapped by a cult? Interesting. That’s (Gotham‘s)Â Victor Zsasz! He’s creepy!

Tom and Liz: Tom is sweet in a psychopathic kind of way.

“Do it for our kid”. Brilliant dramatic irony.

“You think convicted felons should be allowed to carry guns?” “All the ones I know do”

Red knows she’s pregnant….because of course he does. That man knows everything.

Yes, the addition of a child will make things difficult, but it’ll surely drive up ratings!

Ressler and Navabi are oozing with sexual tension. I wish they’d explore that more.

Chasing after criminals as per usual. But what significance is the flowers from Mrs. Cooper? Trouble in paradise?

Oh. The Vehm is after child molesters. I love how they explore these moral gray areas. They’re murderers, but they’ve got a noble mind.

Liz’s neighbor, mother of Stanley, got Liz to admit her pregnancy. Now it’s out in the open, and Tom is really excited. I could’ve seen that coming a mile away. It’s pretty clear that she doesn’t want to KEEP the child, but with her life, it’s hard to blame her. But watching Tom move back into Season 1’s “doting husband” role is pretty interesting.

Elizabeth is smiling! And laughing! Whoa!!

This introspective stuff with Reddington is chilling. James Spader is the coolest. AHH it was the guy who beat up Liz. Straight up WARPATH!

Aram’s crush on Samar is pretty cute, I think. And she and Ressler as partners is weird. Not gonna lie.

This show has some crazy intense fight scenes. The stakes are ten times higher with all the Ressler/Navabi drama

“You’ve never seen a eunuch?” Who would do that to THEMSELVES?!?! OUCH!!

Man, this guy’s CREEPY. He might be typecast but I’m totally okay with it.

Yet another plot twist. Are they really setting up with fake pedophiles? That’s insane but also genius. Now the tables have completely turned.

Reddington is SO intimidating, but I love how he can switch it on and off. One minute he’s threatening this man’s life, and the next he’s talking about his love and affection for a song. Â I love that look on Dembe’s face, too.

And now Red and a priest. Epic.

Commercial. Does anyone watch these anymore?

If you really listen to Reddington, he’s got a lot of deep thoughts and interesting philosophical questions. This speech with the priest is no exception.

It’s hard to pay attention and write at the same time, especially when Spader is giving an epic speech.

“If they only switched to a good burgundy, people would be much more devout”.

Mr. Wagner is arrested because he smoked in school. What.

Reddington screwed the priest (the “Cardinal”) to raise funds for “our war”. What does that mean? Any theories?

Ressler DIDN’T recommend Samar. Ouch. But she got last laugh with that bed burn.

Liz put her hair back!!! Next stop, cover of Vogue.

“There is never a convenient time to have a child.”

She’s right. He is the only reason she needs protection. But it’s insane how soft Reddington can get.

It was Aram!!! He’s such a sweetheart. He and Navabi? I ship it.

I was hoping to have Stanley’s mom as a regular character. Sad day.

DON’T GIVE UP YOUR CHILD!

This has been a recap of this week’s all-new The Blacklist.Â Stay tuned for regular reviews, and let us know what your thoughts on the show are!