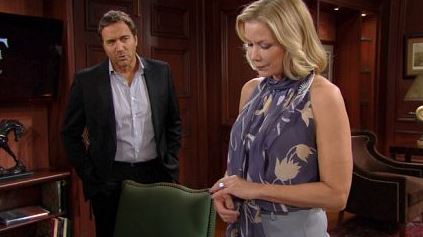 The Bold and the Beautiful fans are not shocked when someone dies. We aren’t even at that point where we feel that there is much we can do about any of it at this point. We aren’t even sad at this point because we know most people just come back from the dead, anyway. In fact, so many people have returned from their deaths that we can’t even handle what is happening on this show. They all have like nine cat lives or something. So many people have come and gone and then come again to show up alive and well, and we can’t forget those storylines and what they’ve meant for the show. Right now we are focused on this because of the rumors that Bill Spencer is about to die.

We know that Bill Spencer cannot die. He is the sole reason for so much of the drama on this show, but here he is lying unconscious in a hospital without any hope of survival after falling off a balcony during a fight with Ridge and Thorne. So, while he might fake die and then come back, we thought we’d go back and tell you about those other times your favorite characters from this show died and then came back to life without much of a pause.

She’s been almost dead more times that we can count, but our favorite was the time that she as kidnapped as a child and presumed dead. She was taken by an ex of Ridge’s that wanted to get back at everyone for her own miscarriage. He got her pregnant, and her fight with Taylor causes her to lose her baby during pregnancy. To get back at her, she ended up taking Steffy, who we know is Ridge and Taylor’s daughter, and tells everyone she died while she tries to take the baby herself and make her her own daughter. It was a horrible situation that so many people could not get over. We are all shocked that she did this, but we also know that it all worked out in the end. They realized Steffy was alive after they all thought she was dead, and they found her, rescued her, and they brought her back home to be with them.

Do you remember that time Bill pushed him out of a helicopter in Dubai? He was thought to be dead because, well, who can survive the fall from a helicopter? Well, we’ve decided that if he can survive this, then anyone can survive anything. Bill and Justin decided that they would kill him by pushing him. They thought they could cover it up as a terrible accident that was unavoidable and no one could do anything about it. It was one of those situations that didn’t make anyone feel good about anything, and we all thought he was dead.

When it turned out that he was alive and well, we were all shocked. It was nothing that we saw coming, but it was an even bigger shock for Bill and Justin, who thought that this might not be something that they’d have to deal with. Now they’ve found him and they’re worried that he will tell on them for what happened. Fortunately for them, he did not remember anything from the accident. He did, after all, fall out of a helicopter in the air.

Remember when Quinn pushed him off a cliff? He died, but he came back. And we all learned a very special life lesson here. We all learned that there is nothing that anyone will do that makes much sense when standing near the edge of a cliff. If you are in an argument with anyone during a time like this, they will push you off. They will also survive, though, since this is not the first or the last cliff death that happened to turn into a non-death around here. However, we would like to say that we wonder why so many people are so ready and willing to go stand on the edge of a cliff with their backs to the big fall behind them and argue with people they know hate them.