Home
The Borgias
The Borgias Series Finale Sneak Peeks: Alexander Looks to Carve Out a Kingdom 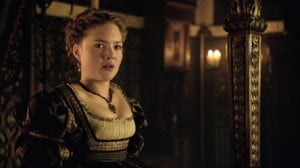 Now that Cesare and Alexander are reconciled, both Rome and the Borgia family have been strengthened and can proceed to lay claim to Forli. Catherina Sforza failed to strike while Alexander was at his weakest and now that the papal coffers are filled, the papal armies are replenished,Â and the Holy Father is on the same page with his son, she might have let her final chance to further splinter the papacy slip away. While she may be the most formidable opponent the Borgias have faced in their time as the leading family of Italy, Catherina is nowÂ a decisive underdog against Alexander and Cesare, meaning that she’ll have to pull off one heck of a feat on the series finale of The Borgias in order to pull even with and surpass Pope Alexander.

AfterÂ Alexander fills Cesare in on his ultimate goal, a hereditary kingdom where Cesare functions as both Pope and King, he sends his son out to Forli to march on the Sforza castle. Catherina hasn’t exactly been lying low in the meantime, with her plan consisting of rounding up every ounce of supplies in the city and cutting down the trees that surround her castle so that everything moving near them is a target, but even she’s surprised at the expediency to which Cesare marches on her castle. While she was playing the long game and preparing for a battle that could last for months on end, she didn’t act quickly enough and now faces supremely armed Romans and the possibility of together come winter. Catherina’s pride has kept her from giving in to the Borgia family, her hatred of them as intense and fervent as ever, but if she wishes to save her life and the life of those she loves, a surrender might be the best option at this time. However, would she allow herself to lose the war with the holy family without going down fighting, considering what all they’ve done to her and her family?

Elsewhere on The Borgias, Micheletto reappears after killing Pascal and advises Cesare on the weaknesses of the Sforza castle in Forli, while Alfonso has become more aggressive toward Cesare about the Borgia son’s relationship with Lucrezia.

The series finale of The Borgias airs Sunday at 10:00 on Showtime.

Do you think that Catherina will surrender to Cesare and, by extension, Rome? What will be the end result of Alfonso’s continued frustration at his marriage being undermined by Lucrezia’s love for her brother? Is Alexander truthful about his intentions for his son or is this a case of him being manipulative to get what he wants?