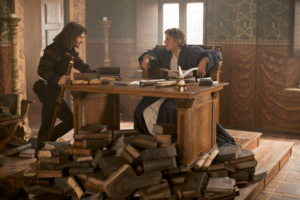 The attack at Forli could have been huge for Juan Borgia. Had Catherina Sforza been brought back to Rome, her castle overthrown, it could have set Juan for life, both as a powerful military leader in an important Italian city and as Rodrigo Borgia’s son. Though he can have a funny way of showing it, the temperamental son on The Borgias only wants to please his father, even if it means throwing Cesare under the bus in the process. Giving his father a foothold in Forli and Catherina’s pride on a proverbial plate would have been a politically advantageous way to win his father over once and for all.

But the attack at Forli didn’t go as planned and now Juan has to find another way to appeal to his father. In a sneak peek from the next episode of The Borgias, titled “Truth and Lies”, he faces Rodrigo’s obvious disappointment over a missed opportunity, as the pontiff had hoped his son’s marriage and residence in Spain had done him some much-needed good. Having Juan assume more responsibility would prepare him for battle and make Rodrigo’s dream of one son in armor and the other son of the cloth, right? Not quite. Juan’s arrogance and, you can argue, desperation made the Forli attack blow up in his face, to the point where it might be better to take him off the battlefield, injured leg or no injured leg.

And that’s just what happens, Rodrigo relieving Juan of his duties as military leader of Rome. It has to be a huge blow to the ego of the Borgia son; he had always been a bit of a black sheep among his father and his brother, so this was his chance to get some spotlight and prove his worth to all of Italy. Unfortunately, though, Juan Borgia may not ever measure up to the son that his father wanted and, at least politically, needed.

The Borgias airs Sunday at 10:00 on Showtime. You can check out two additional sneak peeks, including a marriage proposal to Lucrezia, here.