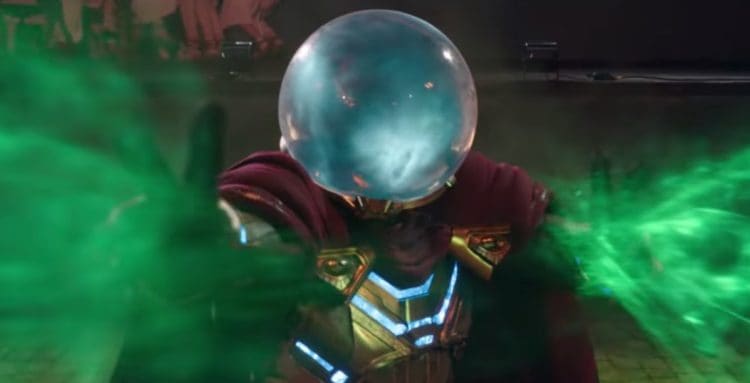 By now a lot of us are used to seeing the behind the scenes footage of heroes such as the Hulk and Iron Man as they really are, covered in sensor dots and not sporting the iconic looks they have on screen, but there are times when the costumes are actually more authentic and far more real than you might think. Jake Gyllenhaal suiting up as Mysterio is a prime example of what it really takes to suit up an individual for a superhero movie, but ironically he’s not the hero. In Spider-Man: Far From Home, there might still be some people out there that don’t know the classic villain from the comics, but those of us that grew up reading the wallcrawler and came to know his many enemies quite well will no doubt recognize the man with the fishbowl on his head.

Mysterio was always a villain once he really started showing up in the comics and he was actually one of the more impressive ones since he didn’t have any special powers to fall back on, no freak accident gave him his abilities or turned him into a specialized weapon. Nope, Mysterio was just a regular man named Quentin Beck who happened to be skilled at illusions and the various technology that allowed him to manipulate those around him. He was good at what he did, in fact in the comic Old Man Logan he played a very instrumental role by actually tricking Logan into thinking that the rest of the X-Men were enemies that had come to assault the mansion and kill the students. Wolverine rolled through the lot of them, hacking and slashing and never stopping to think why his enemies would hesitate just enough so that he could dispatch them. When it was all said and done he finally came to and realized he was holding one of his friends in his arms, not a dying villain, and Mysterio made his presence known. Even if this was, possibly, a different Mysterio, it’s still evidence that his tech and his skills are top-notch. So if the guy can fool someone with the heightened senses of Wolverine, who can smell the difference between people, you know he’s got some serious skill.

Suited up. Ready to fly. Spider-Man: Far From Home out now!

The video above, courtesy of Craig Elvy of ScreenRant via Jake Gyllenhaal’s Instagram account, is just a short video of what it took to get Jake into the outfit and create the whole effect of Mysterio, who in the movie is someone that’s apparently quite convincing and more than a little charming since it would seem that Peter and the others think that he’s on their side. It’s only during the reveal, when the realization that he’s been using his own crew and abilities with the needed tech to create these illusions, that he’s anything but a hero. It likely confused a lot of people to see Mysterio making his way into the fray during the initial trailers that were released, fighting back against something that was destroying the city around it, but those that have read the comics knew better, or perhaps suspected that there was another angle that the director was trying to show. After all some villains did break bad after being heroes for a while, though it’s far more rare than people would think, if not unheard of in the Marvel universe. Mysterio however has been a bad guy for a long time and for a while it was established that he was kind of a low-level villain when it came to Spider-Man since the lack of any real powers didn’t exactly help him out. When competing with guys like Doctor Octopus, Venom, Sandman, and even the Green Goblin, Mysterio just felt a little too much like a sideshow act that didn’t measure up.

But bringing him into the MCU in this way was definitely a lot more exciting than it could have been since the whole dome over his head look seemed to be something that a lot of people were wondering about. In the comics it looks a little, off, to be kind, but in live action it kind of panned out just fine since the look is great enough that it doesn’t detract from the overall character, especially given that the armor is actually as real as it can get, meaning that it wasn’t a series of sensor dots that was going to be made to look awesome in the movie. To be honest such a thing is kind of a disappointment when one watches the extras and sees that there’s really nothing there, but it does make a lot of sense considering that some of the suits, and the Hulk obviously, wouldn’t be all that easy to replicate. Whoever did the armor, the cape, and the detailing for Jake’s suit however is to be commended since it was rendered with great detail and it came off absolutely perfect.