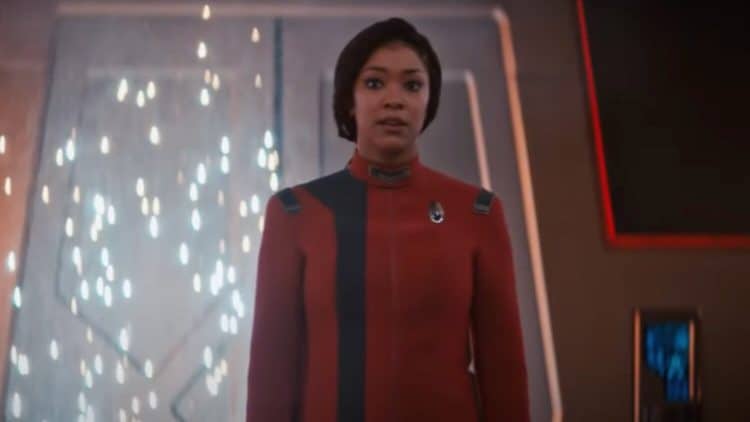 Whether a person is or isn’t a Star Trek fan it’s pretty obvious that things aren’t right within the galaxy as gravitational anomalies that threaten multiple civilizations are wreaking havoc with everyone and everything that lies within their path. For anyone watching that means anyone stuck in a ship while in the middle of space is bound to be in trouble. Just looking at the trailer it’s obvious that things are going to be getting progressively worse until the various individuals and crew members that are presented with this problem are able to find a solution that will help everyone. Galaxy-spanning disasters are nothing new for Star Trek, but each one that is though up tend to be stronger and worse than the last, though the effects differ in a lot of ways since it’s been seen more often than not that some issues will be between Starfleet and another society while some will encompass a much larger scope. In season 4 of Discovery, it would appear that the threat will be far wider and force different people to come together or die alone, as the threat is equal for each and every person involved. So far it looks as though the general feeling will be that the different species will need to work together, and a lot of people already know how well that tends to work when it comes to Star Trek.

So far Discovery has been embraced and maligned alike, which is kind of to be expected since there are plenty of Star Trek fans that aren’t as keen to change their minds about who’s the best and who’s worthy to take on the next stretch of fame when it comes to this franchise. Those that are a little more open-minded have either admitted that Discovery does have its charms and is able to keep people entertained. The difference between Discovery many other Star Trek shows is far more obvious to many of the fans that have been following the various shows and movies over the years, but apart from that is the fact that the show is just as ambitious as any of the other shows that have come along over the years. From the selection of the cast members to the effects to the storyline, Discovery hasn’t really done that much that’s fundamentally different from the other shows, as it’s been a show that has conformed to the era in which it’s been made and is subject to the various types of scrutiny that every show has been given over the years.

Even having a female protagonist is nothing new since this has been done before to great effect, proving that women can take the helm every bit as well as men can. The fact that many male characters are still revered far more than their female counterparts has more to do with the characters than any sexist attitude that might be blamed for such a development. Over the course of 3 seasons, it’s been shown that Discovery is able to stand tall and be counted as a worthwhile addition to the Star Trek franchise, and season 4 is already making it look as though that faith is going to be renewed considering that an issue spanning five light-years in size will affect more than just one planet or group of people, and will be something that will force the need to work together in some way to figure out what’s going on and why. How that’s going to happen is anyone’s guess, but from the trailer, it does appear that such a thing will happen all the same. Those that watch Star Trek sparingly might be able to figure out that the overlying feel of the coming season will indicate that the many different people are bound to come together in a very meaningful way that might be meant to last, but likely won’t since the differences between the many different species in this franchise kind of prevent it. That’s been one of the driving forces of Star Trek for so long, after all, people can’t get along since their differences are simply too great, and working past them is rarely possible since each coming generation will typically find a way to bring those differences back to life.

But season 4 is making the struggle very real, and when it arrives there’s a good chance that we’ll hear more about it since the idea that things will change, as they always must, is one of the driving forces behind this franchise. People might resist it and might want to focus more on past shows and what they prefer, but somehow, Star Trek: Discovery will persevere, and things will continue moving ahead. Right now the upcoming season looks like it might be more than a little exciting, and meaningful to the seasons that come after