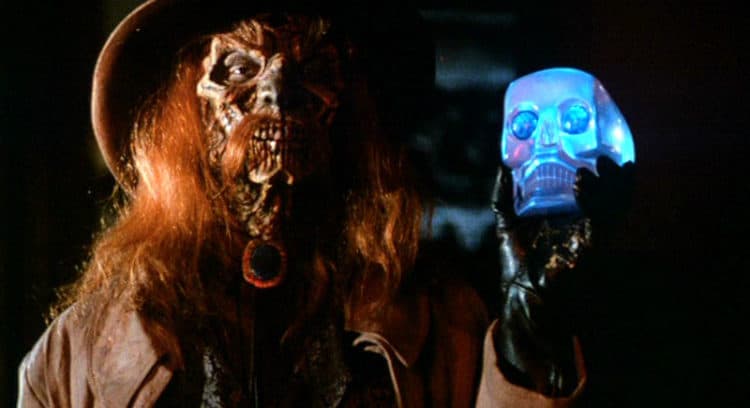 Horror comedies are odd movies to be certain since one moment you’re cringing and wondering when it’s going to be okay to look again, and the next you’re roaring with laughter since something struck you funny despite the continual horror that’s going on within the scene. It’s a stunning mix that not everyone understands since horror and comedy seem to exist on opposites sides of the movie spectrum, but when you put them together it becomes something unique that delivers the kind of thrill that leaves you feeling a little more alert and a lot more satisfied. The 80s had plenty of these gems lying around and despite whether they were good not such movies became an important part of pop culture back then and have remained so to this day. When you look down this liste you might wonder why you don’t see Elvira and Killer Klowns from Outer Space. Well, they might make a top ten list, but these below are just too funny to pass up on.

Here are five of the funniest comedy horrors from the 80s.

The Burbs is easily one of Tom Hanks’ most forgettable movies since the 80s produced a great many films in each category and seemed to be going for quantity over quality at times given the nature of some of the movies we saw back then. But when a new family moves into a calm and quiet suburb you kind of expect the neighbors, each of them with their own distinct quirks, to react in a way that’s less neighborly and more suspicious, especially given that the new family doesn’t exactly endear themselves to the neighborhood and act in a very strange manner when it comes to their personal habits and nighttime activities.

Some people would argue that the original was better, but a lot of us grew up watching this version with Rick Moranis and Steve Martin. It’s a simple story really about a guy that hardly ever gets noticed finding a plant that feeds on blood and eventually human body parts. There’s really not a whole lot left to the plot other than the details that get filled in along the way, but it is quite hilarious since the musical nature of the movie and the acting are top notch and done in such a way that you’ll be remembering the songs for years to come. The dentist song is especially catchy and you might find yourself humming it now and then.

A Christmas horror comedy is like a trifecta of entertainment since not only do you get to enjoy the holiday season but you get to laugh and scream in terror as well since the Gremlins were anything but jolly. When this movie came out it seems fair to say that people had no idea what to expect since the cute little fuzzy creature that was introduced first seemed to indicate that it might actually not be so bad. But then he gets wet, reproduces in the strangest way, and the evil little fuzzballs that he birthed eventually turn into green, mean little buggers that end up taking over an entire town in a manner that could only be described as being deadly but fun.

The first House was entirely creepy without much humor to it at all since it was basically a house trying to kill people. This movie however took roughly the same idea, but expanded on it in a way that took some folks by surprise. Not only was it a different house, but it was a portal by virtue of being built of the kind of materials that would give it the supernatural qualities that might make it appealing. So yeah, the movie was kind of stupid in a way but it had enough gags and funny bits to really last as a memory and become something that people might recall years later since it was just campy enough to laugh at.

If you find that you can’t laugh at or with Bruce Campbell then you might need to check your sense of humor since unlike the first film this one was absolutely hilarious and scary in equal measures. This scene alone is what a lot of folks tend to remember since Ashe was slowly but surely going nuts as the dark force continued to work on him, whittling down his mental defenses even as it tried to kill him in various ways. And of course from this moment on out the movie only got creepier and funnier since Army of Darkness came next and that didn’t even give the pretense of being anything but funny.

Comedy horrors are funny because they take something we’re afraid of and make it possible to laugh at them, and that’s just cinematic gold.