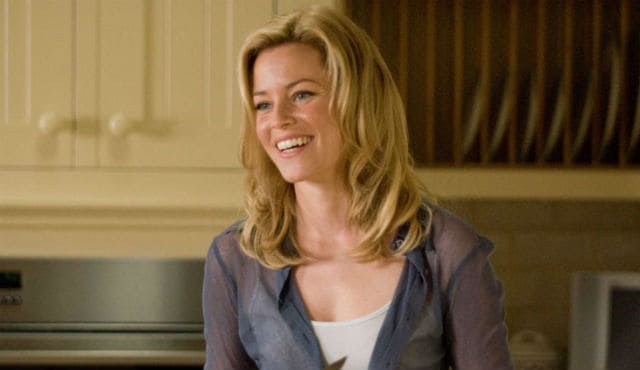 Somehow it seem that a lot of people get Elizabeth Banks and Rachel McAdams mixed up fairly often. It’s not too hard to do really when you look at one then the other, but when you put them side by side the similarities tend to fade away as the differences take over. But back to Elizabeth, she’s one of those actresses that seems to come on in a big way and then fade back for a while to do a couple of films here and there, and maybe a TV appearance, to kind of take it easy. But when she’s on she’s on, it’s all full-ahead and no stopping until the job is done and she’s satisfied that she’s done what she could to contribute to a project. On many projects she’s a welcome sight since she brings a great deal of energy to the screen and tends to play characters that are engaging and able to become a needed part of the movie.

With that being said here are some of the best movies of her career.

Andy is kind of hopeless when it comes to women, but when he meets Beth, a woman that his buddy Cal steers him towards, there’s not a lot that he needs to do in order to really win her over. The only thing he doesn’t find out about until later is that Beth is a bit freaky when they’re alone and has a very, comfortable, relationship with her shower head. Andy thankfully snaps out of his booze-induced stupor at that point and makes his way out of her apartment only to run into his buddies since they managed to sneak in as an attempt to get him back on the right track. Once they leave Cal decides to stay behind and wouldn’t you know it, he and Beth hook up.

You almost want to hate her character in these movies since she’s working at the behest of the government and is nothing but a fussbudget when it comes to Katniss and Peta, telling them what to do and when to do it so often that it would be a wonder that someone didn’t just tell her to buzz off in a less polite way. But as the movies go on you can see that she becomes something of a sympathetic character after a while, realizing what’s really at stake and that the government that has held people down for so long has gone way too far. The uprising that comes throughout these movies is something that was inevitable.

Based around the true story of former Eagle player Vince Papale, the movie did take a lot of liberties when it came to his life and his history and even kind of botched the return that Papale became so famous for. But all in all it was a good movie since it conveyed a lot of feeling as since Rudy has been one of the few movies that people actually enjoyed in terms of it being a football film. Banks of course had to play the ride or die Giants fan, something you just don’t admit to in Philly unless you’re 100 percent sure that you can take the constant criticisms and digs that people will undoubtedly sling at you.

Danny didn’t know what he wanted from life, but working in the same company for so many years wasn’t it. He wanted to stay together with his girlfriend but he messed that up too since he couldn’t help but try to do everything at the drop of a hat and forgot that people need time to actually make a decision about such things as marriage and actually spending one’s life with another person for a prolonged period of time. When he and his buddy Wheeler are forced to mentor two young boys however they begin to see a different side of life that they weren’t aware of, and in the process begin to understand that there’s more to life than what they’d originally believed.

It seems fair to say that no one wants to be the person that has to talk a jumper off of a ledge since there’s a good probability that if a person has gone this far that they might actually do it. But when Banks’ character has to talk to someone that has no intention of jumping but is instead serving as a diversion and is seeking to clear his name she has more to deal with than a fake suicide attempt. The plot continues to thicken as he continues to draw attention to himself so that his accomplices can do the work they need to do in a building just opposite the one he’s in, thereby clearing his good name and pointing out the real criminal, the man that sent him away in the first place.

Something about Elizabeth just causes any film she’s in to brighten slightly when she appears.