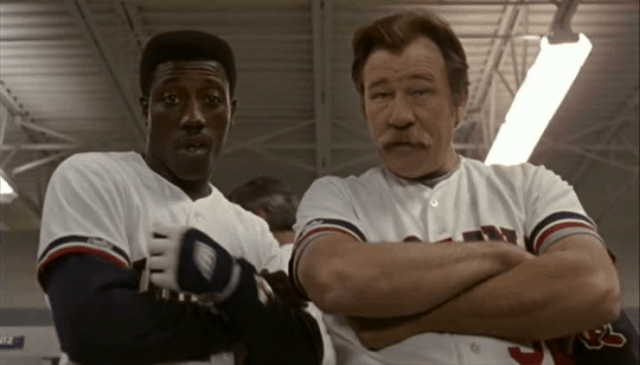 You’d be surprised how many baseball movies there are out there. And in all honesty most of them don’t cut it as far as quality is concerned. I think one of the main reasons is that they don’t seem to capture the “whole” picture. There may be a couple of flashy players that are entertaining. Perhaps a hot girl enters the mix. But if you want a great movie you need all the characters and that includes the coach.

One of my favorite baseball movies, Major League, was on yesterday. I couldn’t help but to realize how amazing Lou Brown was. When you think about it, it’s pretty easy to just toss a coach into any movie, let alone one about our favorite past time. So when you can easily identify with and understand how awesome the coach is, it makes a baseball movie that much better.

Here are my picks for the five best fictional movie baseball coaches.

From the very beginning of the movie you have to love Lou Brown. “I got a guy with some white walls on the other line.” He’s just all man. When he pisses on Dorn’s contract you know that Brown is a force to be reckoned with. “Don’t give me this Ole bull***!” And then at the end when he tells Ricky “You’re my man kid, go get him,” it’s golden. “Every time you hit one in the air, you owe me 20 pushups.” The quotes are endless.

To me nothing emulates the old school baseball coach more than Pop Fisher. Wilford Brimley was the perfect fit for this role. Chubby, sort of mean, and definitely angry at the world. But the best part is that you know this guy would give his life up for the game. “I should have been a farmer Red.” I had goose bumps when he said “and you’re the best G-d damned hitter I ever saw. Suit up.” And I still get goose bumps even thinking about it.

Jimmy Dugan – League of Their Own

Ex Ballplayer. Total Drunk. Hates female ballplayers. What a great background to Tom Hanks’ character in League of their Own. Personally I think this was the last 100% comedy role for Hanks. When he threw the mitt and hit that little kid’s face, I laughed more than I normally would at a movie. I mean the first scene with him pissing is priceless. But, you know throughout the entire movie that he’s a fierce competitor and loves the game.

Perhaps the most classic of all grumpy coaches is Walter Matthau’s character in Bad News Bears. From his wacky relationship to Tatum O’Neal to his constant verbal abuse of children, he’s incredible. But even this broken down ex ballplayer cares about these children. He eventually turns a corner and realizes the game is all about fun, and not necessarily winning, at least at the kids level.

I mean when he had one of his players give that rich guy a “fresh beer” you know he’s showing some serious dedication. Plus he coined the phrase “Let them play! Let them play!”Â  Plus that guy is now on The Grinder and he’s absolutely amazing as Rob Lowe’s dad.Â  What guy will go out of his way aid and abed a bunch of punk kids illegally driving to Houston to play baseball?Â  What a stand up guy.