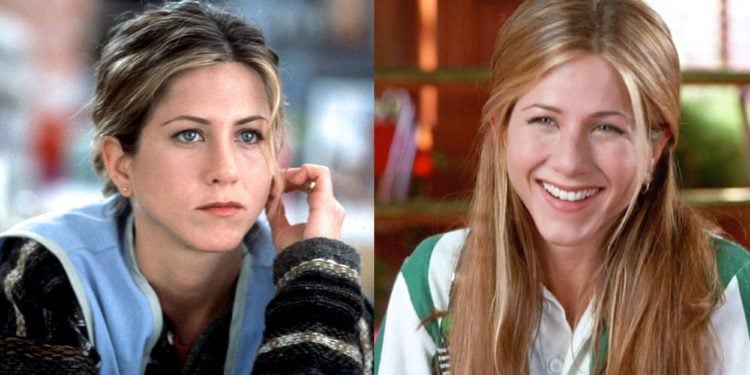 There can’t be that many people in the world that don’t know who Jennifer Aniston is at this point. When she was in Leprechaun there were probably a lot of people that didn’t know, when she was in Friends people were exposed to her in a big way, and when her movie career really started to get going it was likely that most people knew who she was. But anyone that doesn’t know who she is now is either not the type to watch movies or TV or is simply too young to have any idea who she is. Her career has been nothing short of legendary at this point since she’s done so much and been great at most of it. Even with movies that can be called missteps she’s still every bit the professional and has managed to show through in a way that proves that she’s one of the best in the business.

The title of this film is kind of misleading since Justine has been seen as a good girl for a while before the movie starts, but when she’s tempted by a man that’s a little unstable and can’t let go of whatever relationship they started she truly gets herself into a jam.Â  First the man, Holden, is unable to let her out of his life, while her husband’s friend, who has been following Justine during her trysts, blackmails her into having sex so that he won’t tell her husband. When she becomes pregnant however the real problems arise since her husband is told that he’s sterile and the man that impregnated her is a raving lunatic.

Some people are simply too uptight, as is the case with Reuben, who is a risk analyst that has a serious hang-up about anything that seems dirty, risky, or even suspect when it comes to his everyday life. When he meets up with a former classmate, Polly, he begins to assess just what’s really risky however, going back to the ex that cheated on him or staying with Polly, who’s a complete free spirit and isn’t into doing anything that’s not considered to be something of a risk. Eventually Reuben comes to find out that life is all about risk, and that not taking the risks that lead to the biggest payoffs is one of the biggest mistakes anyone can make.

Julia is a sex fiend, plain and simple. The woman is so hot for her employee that she eventually decides to try and blackmail him by showing him pictures she took when he was passed out and in no way able to consent to the lurid poses she manipulated him into. But like the other horrible bosses she does get her comeuppance since at the end of the film her employee gets the upper hand thanks to his friends. She’s perhaps the only one of the bosses that the guys didn’t think about killing and it’s kind of obvious why. After all, two of these guys were single and looked at Julia as a good time.

Rose was probably the strongest-willed member of this group in the film to be quite honest. Kenny was about as threatening as a wet dish rag while Casey was little more than attitude. David was next in line as far as willpower went, but he was still far too chaotic in his ways to really match up to Rose. In fact if you’ll recall, if you’ve seen the movie, it was Rose that bailed them out of the jam in the first place since she was the last piece of the puzzle that finally boarded the plane and got them underway. Plus, her little ‘prayer time’ and the striptease that she did for the drug dealer were major life-savers that allowed the group to keep on moving forward.

This cult classic is one that is still easily brought to mind since so many people have felt this way at their job in one way or another. While a lot of us might have never worked a cubicle just knowing that we’ve had a boss or two like this is enough. The experience isn’t confined to the office either since Joanna’s boss is the kind of guy that a lot of people might defend, saying that he’s just trying to help make the business money. But a lot of us that have been there, done that, would likely give the old one-fingered salute to him and anyone else on the job that had made it so increasingly difficult. That’s the food service industry after all, there’s not a lot of middle ground between hating what you’re doing and being blissfully numb to the experience.

Yeah, a few of us have shown that little bit of ‘flair’ a time or two.