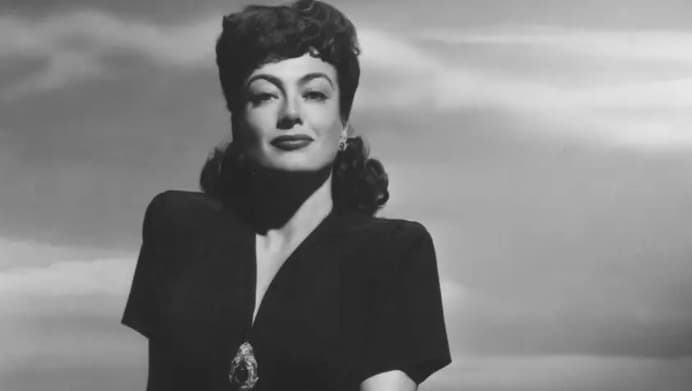 Despite being known as one of the most dazzling and sensational stars of her time Joan Crawford didn’t have an easy life growing up. She didn’t even know her stepfather wasn’t her real father until her brother told her. She was also molested by her stepfather until she was sent away to school, so one can only imagine just how disturbing her life had gotten at one point. Throughout everything however she was enchanted by a life on the stage and seemed to be most at ease when thinking about acting, though she didn’t manage to get much schooling in during her younger years either due to injury or to the fact that she was working more than studying for a good chunk of her life. But eventually she did make her big break into show business and people began to realize her greatness after a while.

Here are just a few of her best movies.

It’s hard to tell if there’s really any winners or losers in this movie since Crystal, the woman that Crawford plays, is kind of resigned to the fact that she’s attractive enough to steal men away from their wives be it a beneficial thing for her or not. In fact it seems more likely that the wives in this movie are the antagonists at times as they’re horrible gossips and are so keen to cause trouble in one another’s lives by spreading rumors that should probably stay in-house as much as possible. Crystal is not a good person by any means as she doesn’t want anything to do with a stepchild and cheats on her new husband when they’re married, but she’s honest about it at least at the end.

There seems to be a lot of infidelity in these older movies as it must have been a problem or a concern that touched upon everyone at some point. But when Lucy is released from a mental hospital after brutally killing her husband, who was cheating on her, she goes to stay with her brother along with her daughter. The twist of the movie comes when murders begin to pile up once again as an ax-toting killer seems to be on the loose, which points all fingers at Lucy. The trick however is that it’s her daughter Carol committing the murders as she’s been trying to pin them all on Lucy in the hopes masking her own crimes.

Myra kind of dodges a bullet in this movie, or a car in fact, since the man she chose to marry was planning to murder her all along and split the money he got from her death with an old girlfriend that he’d keyed in to the idea. Of course it pays to be smarter than the person you’re attempting to kill and this film shows that such a thing isn’t always possible as Myra manages to get away from Lester on foot while he’s chasing her with his car. When he sees his ex, Irene, he thinks it’s Myra and stomps on the gas, thinking to run her down. Myra simply walks away, relieved, when Lester hits Irene and then crashes, dying as a result.

This is a good look at what happens when you have a kid that just refuses to accept that social status isn’t all there is to life. Mildred does everything she can in order to make Veda happy and the kid still replies with little more than scorn, treating her mother in a shameful manner that would embarrass most people and cause some parents to just kick her out to see what life was really like in the world. But Mildred does her best and sacrifices so much that she nearly ruins herself, while Veda just keeps on taking and taking. She even tries to pin a murder on someone else so that her daughter can go free, but it doesn’t work thankfully.

1. Whatever Happened to Baby Jane?

There’s really no good guy in this film since Jane is insane and Blanche is the victim that eventually turns out to be the antagonist that has been suffering because of her own misdeed. Jane was initially the star between the two of them while Blanche kind of existed in her shadow. But as they grew up their fortunes reversed and Blanche became the popular one while Jane was forgotten. Unfortunately after becoming paralyzed from the waist down Blanche had to rely on Jane for quite a bit, meaning that she was at Jane’s mercy. As you can imagine Jane used this to her advantage more than a little and would have surely killed Blanche by neglect or abuse if things would have gotten any worse.

Despite her rough life in the early years Joan Crawford became a name that most everyone knew when her career began to flourish.