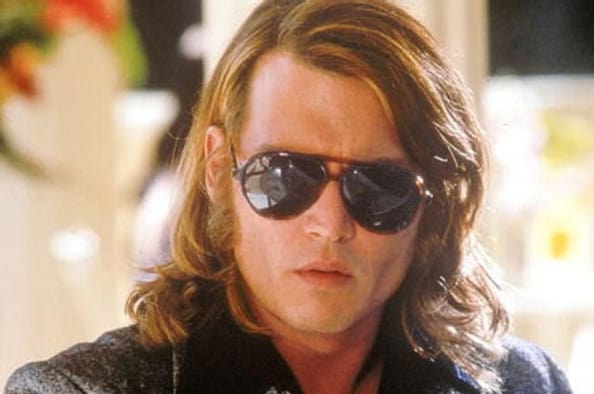 There’s no big secret that Johnny Depp has become one of the most hated actors in Hollywood despite the fact that he still has a legion of fans that are willing to give him the benefit of the doubt and still follow everything he does. Throughout his career he’s done a great many things that have distanced him from the crowd, sometimes in a crazy manner and other times in a way that’s nothing short of brilliant. His roles thus far have run the gamut from absolutely serious to as out there and crazy as can be, but he’s played every single one of them with a level of skill that’s been enticing and breathtaking at times and almost cringe-worthy at others. Whatever you say about Depp the fact is that he’s become a legend in the business that isn’t going to fade anytime soon, and whether you like him or not, he’s earned his accolades.

Quite honestly this is a personal favorite since it strikes so close to home and is a much deeper movie than many people would give it credit for. Based on a short story by Stephen King that had a much different outcome, this movie is about a writer that is slowly but surely slipping into a self-induced madness that’s brought on when he catches his wife cheating on him and suffers a serious mental breakdown. The stranger known only as Shooter continues to plague Mort Rainey as he tries to figure out just where the mysterious dairy farmer/writer came from, and how he can get him out of his life before he becomes a part of the twisted narrative that Shooter seems to be writing.

4. Fear and Loathing in Las Vegas

In the process of writing an article and covering a sporting event a massive drug trip takes place and is turned into a movie the likes of which people are still talking about today. Duke and Gonzo, two of the most insane individuals ever to be featured in a movie of any type it would seem, are on a constant high throughout the movie and one can’t help but wonder just how they survive to the halfway mark without movie magic working in their favor. Quite honestly it’s a bit funny in some spots and rather depressing in others but a lot of people can agree that it’s something you won’t be likely to forget.

The idea that the kind of money made from drugs is real is something that might be hotly debated between those that know and those that don’t. Whatever side you land on, the truth is that the price for all that money is something that many people can’t pay, as George tends to find out in this movie as he sinks deeper and deeper into a life that doesn’t have any well-defined end for those that allow themselves to be caught up in something that offers no clear way out when it’s all said and done. And yet for some it seems to be like a sickness that takes hold and won’t let go, or a bad choice that acts like a trapdoor, posing as solid footing.

Some people didn’t like Depp’s version of the Mad Hatter but quite honestly it was one of the best, most well-defined parts of the movie as it unlocked another personality that Depp had yet to show to the audience. His whimsical manner was easily offset by the dark and foreboding tone that he took once he was angered, and truthfully it’s a little easier to take than the animated version since he brought the character to life in a way that made a small lick of sense in an otherwise chaotic world. Of course the Hatter isn’t really supposed to be sensible person but at the same time there is some hint of order among the chaos.

1. Pirates of the Caribbean: The Curse of the Black Pearl

This has to be one of the crowning jewels of his career since Captain Jack Sparrow is a character that is loved by just about everyone that’s ever seen the films and he was brought to life in a way that has touched many upon many people throughout the years. This movie in particular was great since it was the strongest showing of the character and possibly the best as he was introduced in a way that made his legend grow immediately without too many questions. As the series went along he was still great for a while, but after about the third movie things started to go downhill since far too much was explained about the character, thereby kind of ruining his mystique.

Say what you want about Depp, but the guy is a genius when it comes to acting.