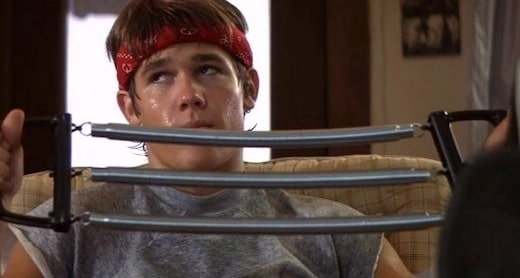 It doesn’t matter who you are, there will almost always be people that will claim that The Goonies is one of the most classic movies ever and will remain so (hand raised). There were so many memorable characters in the movie that Brandon doesn’t always stand out as much as he should, but as the protector of his little brother and the group he is an important figure. He’s the quintessential buff guy despite having a working brain in his head, and as you might imagine he’s vexed by his little brother and his friends quite often. Brandon is that guy you know has a heart of gold but he’s so intent on getting what he wants out of life that he sometimes seems a little, well, rude and kind of boorish. But deep down Brandon is the guy that will stick up for the underdogs if only because he does value fair play.

Here are a few instances in which he was at his best in The Goonies.

5. What happened to your braces?

Well how would you feel if your little brother got a kiss from your girl before you did? Admittedly it was in the dark and Andy had no idea that it was Mikey in the first place, but it would still sting just a bit. But Andy knew how to remedy that at least by pulling him in for another kiss. It might not have been the right time for it seeing as how they were trying to get away from the Fratelli’s and escape the imminent cave-in. But then when does teenage romance ever pick the right moment? Thankfully Brand was able to forgive his little brother for a mistaken kiss and Andy was able to let Mikey down in the nicest way she could.

This might sound a little dark for a kids’ movie but it was said in good humor since Brandon and Mikey’s mother was a bit emotional at the moment and wasn’t really thinking straight since she said that she would commit Hare Krishna instead of Hara Kiri. Thankfully Brandon had been around his mother and brother for so long that he knew just what they meant when they started stumbling over words. The only problem was that it didn’t really help when he found out that both of the tires on his bike had been flattened, leaving him with no other recourse than to ‘borrow’ the bike of the little girl next door.

So it’s true that Brandon wasn’t the most popular guy in school, but riding around on a little girl’s bike wasn’t bound to improve his rep any. Troy on the other hand wasn’t bound to just let it go at that since the moment that Andy asked if they could give him a ride Troy was all over it, in his own fashion. You might think that driving Brand off of a cliff would be the end of him, but then you need to think that this is a kid’s movie and there was no way that they were going to allow Brand to end up broken and bloody so early in the movie. Plus, if you’ve ever been to the Pacific Northwest and know the area there are plenty of hillsides that can be rolled down or that terminate in soft, spongy earth at the bottom. But yeah, a person might not be jumping up so quickly after they land.

Remember how I said that Brand was subjected to his brother and friends’ machinations earlier? Mikey’s not a dumb kid, and as a result he was able to outsmart his brother at least a couple of times during the movie, and even think around him when Brand wanted him to simply go home. In this scene however it seems as though Brand might at least pay attention to his little brother scheming just to avoid what would happen. But then again when you’re so used to ignoring your younger sibling it’s pretty easy to think that they can get the drop on you and find a way to surprise you in the most insane way. Brand found that one out the hard way.

Even when you’re on a treasure hunt it seems that you’ve got to answer the call of nature as the group found out at one point. Of course when Mikey decided to designate the ‘little girls’ and ‘little boys’ room he forgot that his older brother wasn’t likely to seem like a little boy in front of Andy. So of course the line “This is the men’s room” had to be put in just to save a bit of face and remind Mikey that Brand wasn’t a little boy.

If these weren’t funny enough, you might want to check out an article by Dan Gunderman of the Daily News concerning how Josh Brolin channeled his inner Goonie a while back.