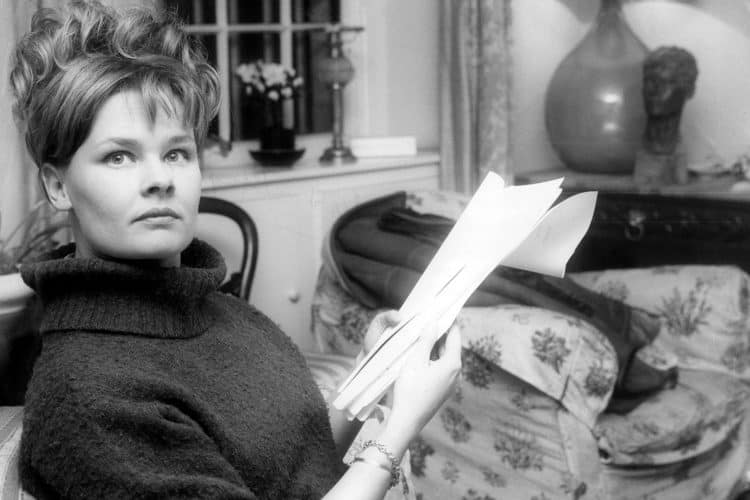 Some actresses simply exude charm, some are pretty faces that have a lot of talent, and then some like Judi Dench just have an aura of authority that follows them about in a manner that doesn’t simply go away, ever. She’s had a long and very successful career at this point and at one time was more prominent in the theater than anything. The words to describe with are definitely class, elegant, and yet one could also use strict and even stern to put a finer point on it. There are roles that Dench has fulfilled that show her to be a kind and very caring woman, though there are also some that paint her as a rather vicious and socially superior lady that no one wants to cross if they can avoid it. The best part is that she can flip the switch so effortlessly it seems that you never know which side you’re going to see until she unveils it. Throughout her long years in the theater and film industries she’s managed to hone her skills to such a fine point that it’s very easy to call her one of the absolute best in the business.

How could anyone possibly think that separating a mother and her child was a good idea if she loved them so dearly? This is the story that Philomena lives out in the movie as she recalls how 50 years prior she was forced to sign away her parental rights after her son was put up for adoption. When her daughter decides to enlist the help of a writer to tell her story the search for her son begins, but the convent in which he was born is no help, so they must travel to America. Upon learning that her son has been dead for 8 years she also learns that he visited the abbey where he was born, and is buried on the grounds. Despite everything Philomena decides to forgive those that took her son away from her.

This was a new beginning for the famed 007 as Pierce Brosnan took the reins and took off running. As M, Judi Dench gets to play Bond’s superior and is quite good in her role as well. She’s one of the only people that can get Bond to do anything he doesn’t want to most often and is the one person that is able to really bring him down a peg when it’s needed. The movie is of course about a race against time and a mysterious enemy that employs many different agents that are out to stop Bond even as he tries to stop them from causing a massive amount of damage to the world at large. In other words, it’s a Bond film with the same stakes, but with a new look.

She’s not a primary character in this film but she is still present since she shows up at a time of great danger in order to warn Miss Peregrine and her children that something awful is coming. Unfortunately her character is killed off by a Hollow, an eyeless, tentacled monster that seeks out Peculiars and feasts upon them. Jake, the boy who was lured/brought to the home of Miss Peregrine, has to look over the Peculiars when Peregrine is taken by the Hollows, but instead of running he uses their unique abilities to save Miss Peregrine and defeat the Hollows before the lot of them escape.

When a group of elderly and retired individuals move to a retirement home in India they find it a bit wanting as it’s in a state of disrepair and not quite up to standard. But it’s comfortable enough and so they decide to stay. As the days go on however they all find hardships to get through, life changes that come about, issues that lie between men and women, and the passing of one of their friends that strikes a blow to all of them as they seem to realize their mortality once again and need to take support in one another. By the end of the movie the home is secured once again after the threat of needing to close down and the residents are comforted in the fact that they take each day as it comes.

The shift from Brosnan to Craig in terms of James Bond wasn’t an easy transition but M was kept on as one of the main characters which meant that Dench had managed to watch 2 different men redefine the role of Bond. In this movie the origins of Bond are looked over as he finally gains his double-0 status. From that point he is sent on a mission to deal with an arms dealer in a high stakes poker game. While Bond wins the game he eventually loses the girl and every last shred of self-doubt he has when he finally puts his head fully into the job.

She’s one of the few that you might actually feel the absolute need to call ‘ma’am’ every time you talk to her.