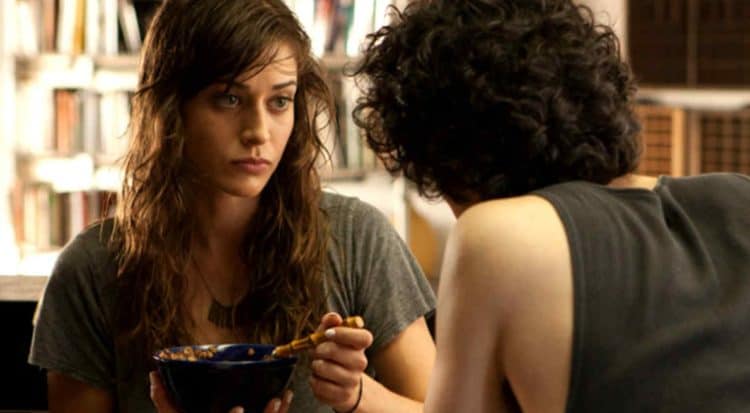 It’s interesting to see which actors decide to focus intently on their acting without going to college and which decide to stay in college before moving onto acting. It doesn’t make much of a difference in a lot of cases it would seem, apart from getting the kind of exposure earlier on that people want. Lizzy Caplan does seem to be one of those that would have had a jump on her career since she didn’t go to college, but quite honestly, despite being as popular as she is now it would seem that it took her a while to really catch on with viewers. She’s good at what she does, and she makes the characters she plays believable, but for some reason it would seem that she doesn’t get quite as much exposure and in some cases is a stand-in for other actresses. That being the case though she’s still a lot of fun when she’s on screen.

Relationships are hard and often kind of complicated as seems to be the point of this movie. It also comes at this point from a rather realistic manner though since the characters do tend to react in ways that a lot of people can relate to. Sarah isn’t the perfect person, neither are those around her, but they make their lives work in a way that works for them one moment and then seems to work against them in the next second. That’s life, and while a lot of people might not really care for the realism that can be found in this movie it’s kind of refreshing since it doesn’t get displayed all that often.

A lot of people were kind of confused by this movie when it first released since obviously it’s being taken from the view of a camcorder which is kind of erratic at times and seeks to give the whole thing a documentary view. When the creature begins to attack the city goes absolutely nuts as several of the party-goers split off and simply try to survive the sudden onslaught of the unseen creature. Lizzy gets a rather gruesome death that’s not even seen on screen since once her character is bitten by one of the smaller, parasitic things that drops off the main creature she begins to eventually bleed from the eyes before she appears to explode when she’s seen behind cover.

As Janis she’s the kind of girl that’s itching to get back at the Plastics for being the cruelest girls in the school. Unfortunately she has to use Cady to do since Cady is the one that the Plastics took interest in. But as you might have guessed when one high school monster is dispelled they have to be replaced by another one since that’s how the hierarchy works. Once Cady goes to the dark side she eventually loses the friends she could count on until she finally makes amends upon realizing what’s happened. This movie actually became something of a huge sensation that people still love watching today.

When Isla Fisher didn’t come back for the sequel it was written into the story line to make sense, and Lizzy Caplan was brought on. In all honesty she kind of brought a little more personality with her role since while Isla is in fact a great actress she didn’t seem to really fit with this bunch as well as Lizzy did. Her character was just flamboyant and aggressive enough with her humor and acting that it made sense and kind of showed that she could hang with the boys in a much bigger way. That being said her character was also just as skilled as the others and bolstered them in a big way.

Honestly looking at this movie when it was released I can say that I didn’t want to see it in the least bit. But upon watching it I was glad I did since aside from the very nerve-wracking idea that the past could be changed without messing everything up, it was pretty funny. The physical and very gross humor that pervaded the movie was actually well-played since the characters were different enough that they complimented each other throughout the movie. Lizzy’s part in it seemed to keep her almost removed from the entire drama going on, which was necessary since according to the guys’ history she wasn’t a part of their group up until that point.

Lizzy is definitely a talented actress and has taken on a few roles here and there that have really highlighted her talents. It’d be fun to see what else she’s going to do as the years roll by, especially if she moves back and forth between comedy and drama.