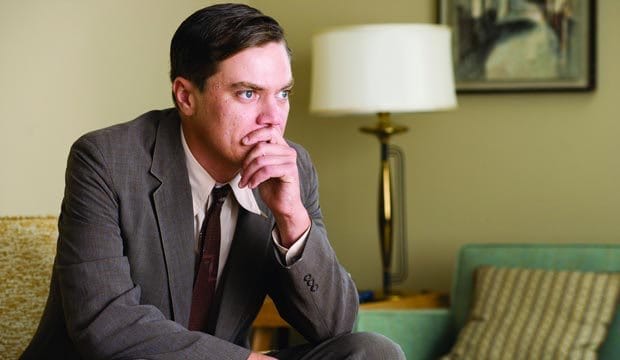 Michael Shannon is a lot better of an actor than some people seem to give him credit for since in truth he’s played a lot of characters that might have been botched by others if they’d tried. He’s played some seriously despicable characters in his time but they’ve been done with such skill that you can’t help but hate the characters but be impressed by Shannon. He’s the kind of guy that looks so severe that being a hero or even a protagonist doesn’t seem like it will be in the cards all the time, but being the antagonist seems to come natural. That being said he’s been described as a pretty nice guy by people that work with him, though it’s true that he does look as though he could fly off the hook at any time. That look is what’s made him the actor he is though, and it’s what he’s been able to use to great effect.

This is a movie that a lot of people probably don’t know about despite the fact that it’s kind of engaging and very dynamic in a way that offers action throughout the entire movie. Shannon plays the antagonist in a way that seems almost bumbling but is also insanely dangerous when he gets his way and has his way with the protagonist, Wilee. This movie definitely gives a look towards the courier service in a way that might not be completely realistic but is still fun since it gives the audience a thrill ride that’s electrifying as the couriers wend and wind their way through city traffic in an attempt to get their job done.

Let’s be honest, there’s no outdoing Terrence Stamp and his original performance as General Zod, but Shannon’s portrayal was just brutal and more updated for the current era, giving birth to a guy that you feel wouldn’t be able to talk in a civil manner while he’s killing you, but would be screaming in your face as he’s crushing your skull. Despite the large number of people that were disappointed by this movie Shannon still did a great job since he’s just flat out scary and is absolutely psychotic. He’s actually bent on destroying Earth to create another Krypton, and isn’t going to worry over the damage done to the current population.

Based on a true story, the Horse Soldiers that were written about were a special unit that was dispatched following the 9/11 attacks and was nearly doomed to failure since they had little to no backup and were completely outmanned and outgunned. This story might have been glamorized a bit here and there but overall it was an inspiring story that was lived by those that decide to serve their country and risk giving up anything and everything it would take in order to fight for their country. This movie was given a lot of hype coming out, but it would seem that people either remember it or forgot about it once the next batch of movies came out.

This is another movie based on a true story that is something so horrific that the people that were eventually exposed to this truth. Richard Kuklinksi was initially employed dubbing pornographic films, though he told his family he dubbed Disney films. Once the mafia shut his business down they brought him on as a hired killer, which he never told his family. How a person would keep a secret like this without going crazy is kind of hard to fathom, unless the person in question is a serious sociopath that has no soul outside of what he shows his family. When it came out you can easily imagine that his family was rightfully shocked.

This book as well as this movie has managed to cause massive amounts of controversy since the idea of book burning is something that outrages a great number of people. The history, the literature, and the identity of a society are bound in what they share and what they document, and as a result this means that what we leave the generations that come after is increasingly important no matter if it’s considered groundbreaking or little more than drivel on a page. In this movie it’s seen that the firemen are those that are bound to discriminate with extreme prejudice what works are worthy and which ones aren’t. That kind of dominance is obviously not what is needed to advance the human race, as it keeps it from moving forward in a dynamic fashion.

Michael Shannon is by all accounts the kind of guy that looks aggressive but is highly skilled in his craft and comes off as a nice surprise. It’s actually fun to watch him act.