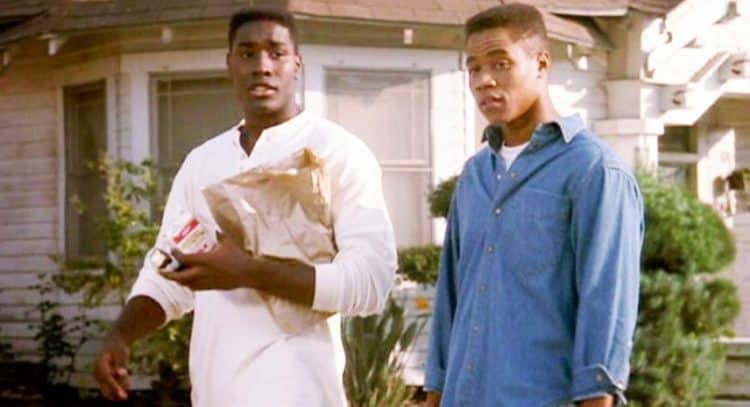 Did anyone realize that Morris Chestnut was actually on the TV series of Nightmare on Elm Street? Probably not since it didn’t last that long, but all the same it was the beginning of a career that’s been somewhat quiet throughout the years since he has played the lead, but it’s been rare to see him in huge blockbusters as he seems to stick to the movies that are known well enough by those that like him and those he acts with, but haven’t really raised any huge levels of interest. That being what it is, Morris is still a very solid actor that has managed to appear in quite a few movies and has been able to keep up with pretty much anyone he’s starring with at that moment. There have been a few roles that have been less than noticeable either thanks to the movie he’s in or the manner in which he’s had to portray his characters, but when he’s at his best Morris is a very impressive actor.

This is one of those movies that had a lot of potential since it had a very impressive and young cast. But this might have killed it as well since throughout the movie there were a lot of moments that could have been done better and possibly lent the movie a great deal of needed tension that would have set it up to be a true thriller and something that might have captivated people a little more. But the story was captivating and the idea of traversing a maze of tunnels so far beneath the earth was an idea that seemed kind of intoxicating no matter how claustrophobic it might have made some people, since when you think about it, beneath the earth is yet another mystery that people have to figure out.

4. Breakin’ All the Rules

Keith Phipps of AV Club is another individual that seems to get down on Morris’ movies when it comes to this one. All in all this movie is a light-hearted picture about a man that’s been stood up and reduced to what seems like a madman when in truth the breakup allows him to become inspired to write a book on relationships that ends up getting a great deal of press thanks to his cousin. In the process however his cousin begins trying to ditch his girlfriend, while the main character sleeps with the ex. In the end everything is worked out and everyone goes on their way with the people they were meant to be with, but it is a pretty funny turn of events.

If you want to describe a tightly-knit work family then going into detail about a group of people that work together, live together at times, and risk their lives together in their efforts to save people would be a great example. The men in this movie don’t always get along of course, as a lot of families don’t, but they lay their lives down for each other all the same and for others when the moment arrives that they need to do so. They share their triumphs and defeats and they watch each other’s backs, that’s what a family does. Sometimes things don’t turn out the way they want, but they’re always there for each other, no matter what.

He had a relatively minor role in this movie since it was more about Demi Moore’s character getting a fair shake in the Navy SEALS program, but he was one of those that was there to help her out and offer a few friendly words from time to time. This movie was one of those that split people down the middle when it came to opinion since the idea that women could or should serve in the SEALS was a big issue that a lot of people didn’t figure needed to be brought up. But when she proved she could do it and hang with the rest of the guys she earned their respect and managed to become just another one of the group that was no better or worse than any of them.

As Toure from The New York Times would likely agree with this was a big statement piece for everyone involved since it was a movie that was daring to show what life in the hood was actually like and what people were going through in reality. Some might claim that it didn’t really show the truth, that people aren’t dying every day as the movie would indicate, but then one has to imagine that those who talk the loudest are the ones that either don’t live in the at-risk neighborhoods or don’t want to see the violence that happens far too often sometimes.

He’s usually pretty noticeable but he does tend to fade into the background at times.